Sticking it to the Man: Policy Failure in the Middle East 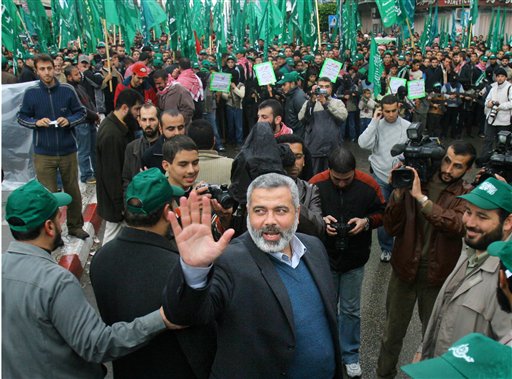 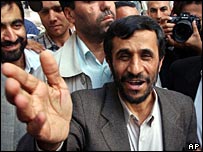 One of the best television commercials I've seen for a while comes from Sprint promoting its Fair & Flexible Plan for cell phones. We see a pompous business executive discussing the Sprint plan and then telling his assistant that joining the plan is his way of "sticking it to the Man."
The assistant is shocked: "But, sir, you ARE the Man."
"I know," responds the executive
"So you're sticking it to yourself," his aide ask.
The executive: "Maybe."

I actually used that television commercial in my recent talk at the Nixon Center to illustrate what's wrong with the Bush's Administration's policy in the Middle East. To put it in simple terms, the Bushies -- in fact, the entire U.S. foreign policy establishment -- is promoting a strategy based on the need for the United States to be the hegemonic power, the Boss, the Man, in the Middle East. At the same time, the same administration led by its neocon ideologues is advancing a policy of democracy promotion and holding free elections in the Middle East, which run contrary to its goal of establishing hegemony in the Middle East. In a way, when it comes to Washington's two contradictory goals in the Middle East -- preserving hegemony and advancing democracy, President Bush, the Man, not unlike the business executive in the Sprint commercial is "sticking it to the man," to himself, that is.
Indeed,since the end of the Cold War the consensus in the "foreign policy establishment" in Washington has been that despite the disappearance of the Soviet threat in the Middle East, United States needed to maintain a strategic hegemony in the region because of "oil" and "Israel," that is, to preserve the "access" to Persian Gulf oil and the protect the Jewish state. The debate in Washington has been over the means to achieve that goal. There was the Hegemony-Lite version adopted by the First President Bush and President Bill Clinton that assumed that the United States could remain the Man in the Middle East through indirect military influence or "off-shore balancing" and now we have Bush and the neocons who after 9/11 implemented a policy of direct U.S. military intervention and control in the Middle East. In that context, both camps agree on the need to try resolve Arab-Israeli conflict as a way of reducing the costs of U.S. involvement that includes juggling Israeli interests and Arab (Saudi) interests.
One could of course challenge this entire hegemonic U.S. strategy -- as I've done in my book, Sadnstorm: Policy Failure in the Middle East -- by proposing that the United States should work with other great powers as part of an strategic oligopoly (as opposed to a U.S. monopoly) to maintain stability in the Middle East and to encourage the formation or regional balance of power systems, a policy that would probably require an engagement with Iran. But neither the Bushies nor the leading Democrats are willing the consider such a change in the U.S. Middle East Paradigm. Instead, they want America to remain the Boss, the Man, in the region.
If that is the case, it seems to me that free elections in the Middle East can only weaken American hegemony. My reading of modern history is that Nationalism Ã‚– and not democracy -- is the most powerful political force and the main reason for civil and international wars, and that democracy has been the most reliable ally of nationalism. By definition they both help release the forces that challenge the existing hegemon at home and abroad, as the experience of other great powers -- the Austro-Hungarian Empire, for example -- has demonstrated. There aren't half-pregnancy solutions here in the form of "tamed democracy." Free elections, especially in unstable societies that are facing foreign threats and where nationalism is a powerful force, tend to give rise to forces that want to Stick it to the Man. In fact, they get elected by stating that as their goal.
By promoting democracy in the Middle East and igniting the forces of nationalism, ethnicity, religion, tribes, or mix of all of these, the Americans have made the Middle East Safe for nationalism, and radical ethnic and religious identity. The United States is discovering that mixing Hegemony and Democracy is producing explosions that are blowing up its interests in two strategic parts of the Middle East - the Persian Gulf (Iraq) and Israel/Palestine -- where it has led to the victory of political parties whose values and goals run contrary to that of the US.
In Iraq, the elected coalition of Shiite clerics want to reverse women's rights and give second-class citizenship to non-Muslims. And their goals of enhancing ties with the Shiite clerics in Tehran are hindering efforts to prevent Iran from acquiring nuclear weapons. One could make the argument that the election of a friendly Shiite government in Baghdad has strengthened the ability of the Iranians to resist Western pressure to discontinue its nuclear military program. At the same time, the election of the radical Hamas in Palestine, would make it close to impossible for the Americans to revive whatever is still left from the Palestinian-Israeli peace process. It's a major blow to U.S. interests and raises also the possibility of an "Islamization" trend among the Palestinians, one of the most secular Arab societies. Moreover, as Rami Khouri, editor of the English-language of Beirut hassuggestedd in an interview with the New York Times, the victories of the Shiites in Iraq and of Hamas in Palestine and the "sense that the Islamists were on the role" have helped ignite the violent anti-Western demonstrations against the Danish cartoons. President Bush and his aides are, indeed, sticking it to themselves.

Captain Nemo said…
Leon, this may be too simple to be true.
I have long doubted the truthfulness of intent and purpose of the "crusade for democracy".
What can be the intents of such a policy?
In American politics, I believe one has to look at ultimate self interest as a motivation - and often in its rawest forms, political at the polls or financial.
The stated intent, fostering democracy as the regime under which the theoretical and practical thousand flowers will bloom, is devoid of such interest in the first degree, if you except the dubious effect of good will at the US polls for "spreading democracy" abroad.
In my opinion, there is a much more compelling set rationales if one adopts the more cynical point of view.
Facts:
1- Most new democracies from the third world tend to emphasize more extreme tendencies, esp. nationalistic, and to be more frequently involved in local or interstine wars, unrest, and weakening due to these extreme tendencies (Yougoslavia and Iraq anyone?)
2- The militaro-industrial complex depends on having clearly identified opponents, and while dictatorial states may look good as paper opponents, their highly centrally controlled nature actually makes it less likely that they would engage in more than surface provocation - democracies on the other hand are much more difficult to predict and control, and extremist groups such as Hamas can easily come out of the woodwork (to the fake horror of our governments) and become a focal point and illustration for the need to continue the "war effort"
3- It is not a hindrance if the opponent is a democracy (or democratically elected), and fact 1 suggests that the appropriate democratic outcome may help in that; case in point, the current public enemy #1, Iran, is a democracy with nationalistic tendencies
4- While professing to be close allies to some of these regimes, the US governement may look at the democratization process as a means of ensuring long term chaos, weakening and in one word Lebanization of some of those countries (Egypt, Syria...) as a means to diminish their long term influence over both Israel and the Occident.
Meanwhile, in a world where unstability and extremism now reigns, we obviously need to build up our military strength and cut down on our own civil liberties. QED.
Seems to me we are underestimating the neocon crowd - they are not pushing democracy by naive misunderstanding of what it will yield, but rather by cuning plotting that what it will yield will serve their interests.
8:04 AM

Leon Hadar said…
Captain/// Just read your comments. I totally agree with you. Please, read my long piec eon the topic in the Feb. 27 issue of the American Conservative. Leon
9:44 PM