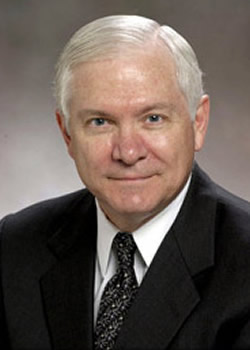 Since the terrorist attacks on September 11, 2002, U.S. President George W. Bush has campaigned in one Presidential contest (2004) and two Congressional races (2002 and 2004) as a victorious “War President.” Bush and his Republican allies in Congress have been swimming towards one electoral victory after another by comparing the White House occupant to Winston Churchill and Franklin Delano Roosevelt that was supposedly leading the American people and the Free World in a global struggle against the terrorist network led by Osama bin Ladin and (allegedly) Saddam Hussein and the Axis of Evil rogues nations (Iraq, Iran, North Korea) attempting to acquire weapons of mass destruction (WMD) to attack American and the West. The rising sense of nationalism that had swept America after 9/11 has helped Bush and the Republican Party rally the American people around the President, the Flag and the Judeo-Christian Civilization standing up against “Islamo-Fascism,” “wimpy” Europeans, and the “weak,” “spineless” and “godless” Democrats. The initial military victories in Afghanistan and Iraq helped to mobilize electoral support for the Bush and the Republicans, especially in the “Red States” in the Midwest and the South and even to advance into Democratic territories in the “Blue States” on the East and West Coast.
But now it looks like President Bush is starting to learn now that if you live by the sword, if you try to exploit a mitant type of nationalism as a way of winning elections, you shouldn't be surpised when a perception of defeat on the battlefield in Iraq is being translated into an electoral defeat at home. Yep. The War President has failed to deliver a victory in Iraq and the Middle East. The expectations that had been raised to the stratosphere -- about finding WMDs in Iraq, uncovering ties between Osama and Saddam, establishing a stable democracy in Iraq, spreading freedom and democracy in the Middle East -- haven't been fulfilled. So... now Bush is facing two powerful forces working against him: On the one hand, the Democratic electoral wave, symbolized by what seems to be the victory by James Webb (see above), reflects the populist/anti-Bush/antiwar mood around the country. In fact, on this blog, in early 2006 I posted a "paging Jim Webb,"expressing my hope that he'll run for the Senate (and the presidency). On the other hand, the firing of Rumsfeld (predicted by yours truly here)and the selection of Robert Gates (see above) as his successor is a response to the anti-Bush rebellion by the Foreign Policy Establishment which is led by James Baker and others. The People and the Man have had enough and Bush needs to make important decisions on Iraq ASAP. If not, he could be swept out from office through pressure from a powerful coalition of Republican and Democratic lawmakers. For more on this and related topics please read my Can Jim Baker Save the American Establishment?

Anonymous said…
Webb is view with deep suspicion by some of the magazine conservatives.

A while back on the radio, a couple of them expressed annoyance that Webb was running on his miliary record. But in reality - Webb never talked about his military decorations.
5:57 AM

Anonymous said…
I posted a "paging Jim Webb,"expressing my hope that he'll run for the Senate (and the presidency).

I was extremely pleased that Webb won, but seriously, I don't think he's presidential material. From what I've seen he lacks the type of personability that recent American presidents seem to possess (Reagan, Clinton, GWB - his father less so, but was at least tall & presidential-looking, and faced a man even less personable).

Webb's difficult task(s) will be be separating the kooky liberal positions from the reasonable ones and getting us out of Iraq.

On abortion and stem cells he will stick with the democrats, but not with passion.

And of course he is against the war.

This sound like a winning set of postions, if he could win the nomination against you know who.
11:28 PM

Leon Hadar said…
After watching Webb on television during the campaign, I've concluded that he was probably not ready for prime time yet. He needs to hire a good pr guy and my guess that six years in the Senate will be great training. But it does seem to me that his /populist nationalist/"Jacksonian" approach could become more popular if the U.S. remains in Iraq and/or the U.S. economy starts to lose momentum.
2:11 PM

Anonymous said…
What Webb has to do is figure out a way to channel that populist economic sentiment in a manner that would be seen as part of a plausible program in the eyes of money center people - Wall St. Types who share his concern, but look for free market solutions.

Combine his great military career - and some learning. He could be a great pol, over time.
7:26 PM