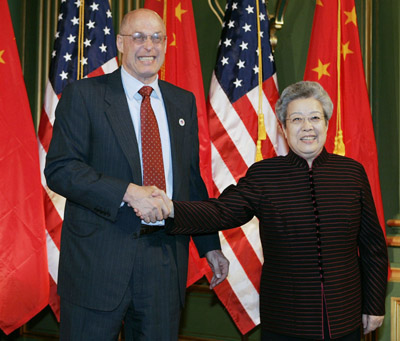 Vice-Premier Wu described the negotiations as a 'complete success' and stressed that 'through the dialogue we have reached much consensus and realised positive results' while Secretary Paulson told reporters that referred to the 'tangible results' of the dialogue which he compared to 'signposts on the long-term strategic road, building confidence and encouraging us to continue moving forward together'.

But most of the agreements over such issues as energy, environment and financial services that were concluded at the talks could have probably been negotiated by mid-level officials.

The Strategic Economic Dialogue has a grandiose ring to it and the hype seemed to have created a lot of expectations among US lawmakers who are expressing growing impatience with the Chinese over their currency policy. The Americans blame the Chinese for the expanding US trade deficit with China which reached US$836 billion last year.

Secretary Paulson launched the China-US Strategic Economic Dialogue last year, hoping that regular talks between Chinese and American economic officials could help overcome the differences, especially over their ongoing disputes regarding trade policy and other issues. The first meeting under the auspices of the new forum took place in Beijing in December last year.

The talks last year and the negotiations concluded this year were taking place against the heated debate on China on Capitol Hill where many lawmakers blame China for keeping its currency artificially low against the US dollar so as to make its products artificially cheap in the American market which hurts the US manufacturing sector.

Some of the critics argue that the Chinese yuan is undervalued by as much as 40 per cent. And they are threatening China with various sanctions if it doesn't change that policy. Indeed, that the Chinese are aware of the mood in Congress was made clear when Vice-Premier Wu insisted during a press briefing the talks should serve a constructive purpose and keep the countries from reverting to the 'easy resort to threat and sanctions'.

She also said that Americans shouldn't blame China for their rising trade deficit, stressing that 'politicising'' trade was 'absolutely unacceptable' and could harm Sino-American relationships. In the only direct comment on the Chinese currency policy, People's Bank of China governor Zhou Xiaochuan told reporters that his government was planning to increase 'flexibility' in the yuan's exchange rate. At the same time, reflecting the growing impatience in Washington, US Commerce Secretary Carlos Gutierrez who took part in the talks stressed the 'need to make progress in all areas as soon as possible', an implied reference to the need for the Chinese to revalue their currency as soon as possible or face tough reaction from Congress.

Another concern in Washington is the level of copyright piracy in China. The Democrats who control now both the Senate and the House of Representatives as well as Republican lawmakers that represent states with 'old' industries such as textiles, have stressed that one of their main goals was to protect workers in the manufacturing industries whose jobs, they argue, have been threatened by competition from low-cost labour economies like that of China.

Democratic Senator Charles Schumer from New York and Republican Senator Lindsey Graham from South Carolina have been threatening to push legislation that would have imposed 27.5 per cent tariffs on Chinese products in order to pressure Beijing to allow its currency to rise against the US dollar.

Instead, the two Senators are now working together with other Democratic and Republican Senators to fashion a bill that would make it more likely that the administration would have to take action against China and other countries if it concluded that they manipulate their currency in order to gain advantage for their exporters. A bill along these lines could be introduced in the Senate in June. Under the current law, the US Treasury Department has to file reports to Congress each year that determine whether a country manipulates its currency to gain trade advantage. But the law doesn't provide for any mechanism to punish the country accused of manipulating the currency.

The proposed legislation would provide the administration with more 'teeth', by allowing it to slap sanctions on the currency manipulator. Similar bills are being discussed in the House of Representatives where China-bashing sentiment tends to be harsher than in the Senate.

In any case, US officials during press briefings insisted that the glass is half-full when it came to Sino-American economic issues, touting the agreements reached during the dialogue on removing barriers to overseas securities firms in China, expanding commercial flights between the two countries and strengthening enforcement of intellectual property rights.

WalMart has several hundred factories in China, where labor is cheap and unregulated, but none in the United States. Other U.S. corporations are surely there for the same reason. The U.S. is one of the most protectionist nations in the world (outside of rhetoric) when corporate interests are threatened, so we can dispense I think with the pretense that the continuation of free and open trade with China springs from any sort of principle.

If political and economic elites on either side of the Pacific prefer that this unpopular situation continue, then they need some pretext, plausible in a superficial way, on which they can pin the blame for the benefit of public opinion in the States.

Resolving the make-believe issue would make it impossible to go on doing nothing about the actual 'problem'.
2:57 PM

Brian said…
And once one of the WSJ/neocon's sacred cows is gored (like China does a deal with Iran) it will be "katie bar the door," "we need more cannon fodder," "no government expense is too big" and "no amount of American deaths too high." in the effort to stop the next "Hitler"

And this time we really mean it is "Hitler(tm)"!!!

And those people saying for the last 25 years that our free trade with China has just been enabling a future enemy will be waiting for the apology that will never ever come.
12:43 AM