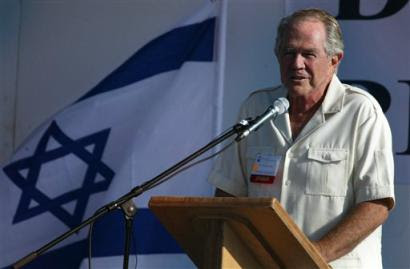 " Ich bin ein Jewish Settler " When I heard the news about Sharon I told a friend to expect one of the crazy Jewish settlers to proclaim that the Israeli PM was punished by God for the withdrawal from Gaza. Well, I was wrong. Instead, it was the most enthusiastic American supporter of the Greater Israel project, "Television evangelist" Pat Robertson who suggested on Thursday that Israeli Sharon's stroke was "divine retribution" for the Israeli withdrawal from Gaza, which Robertson opposed. "He was dividing God's land, and I would say, 'Woe unto any prime minister of Israel who takes a similar course to appease the [European Union], the United Nations or the United States of America,'" Robertson told viewers of his long-running television show, "The 700 Club." "God says, 'This land belongs to me, and you'd better leave it alone,'" he said. More about Nutty Pat here There has been some cr
3 comments
Read more

"Bibi" Netanyahu AKA He Who Dances on Graves

Rabin's wife accused "Bibi" of inciting against her husband "Arik" Sharon was struggling for his life, and the Likudniks/neocons were already celebrating. Michael Oren, an author of an over-rated book on the 1967 War and a scholar with a creepy neocon think tank in Jerusalem, made it clear, in an interview with the New York Times that this was great, great news for his political man, Binyamin "Bibi" Netanyahu Many Israelis followed Sharon away from Likud into Kadima because they believed he represented the best guarantee for Israel's security in the near future," said Michael B. Oren, an Israeli historian. "In his absence, they are likely to fall back on the next likeliest guarantee, Bibi Netanyahu." Mr. Netanyahu has also worked to purge Likud "of some of its more unsavory figures and restored some of its tainted image," Mr. Oren said. Mr. Netanyahu is also given high marks for his stewardship of the Finance Minis
2 comments
Read more

More about Iran and U.S.

Iraqi PM Jaafari and Iranian VVP Aref: A Marriage made in Teheran (through U.S. matchmaking) My recent analysis of U.S.-Iran tensions: January 4, 2006 US Headed for Confrontation With Iran But probably not all-out war by Leon Hadar I've been embarrassed a few times in the past with my predictions (for example, that it was going to be U.S. President John Kerry in 2004), but I've also been right on a few occasions (for example, my book, Quagmire: America in the Middle East, was published in 1992). So let me put my credibility as a political analyst on the line again and make another forecast: The news this year will be dominated by the growing confrontation between Washington and Tehran (if that doesn't happen, well, I promise not to remind you about that early next year). Notice that I'm hedging my bets here. I refer to "confrontation," as in diplomatic and military confrontation, and not to war, as in the war with Iraq. I don't think that t
1 comment
Read more
More posts