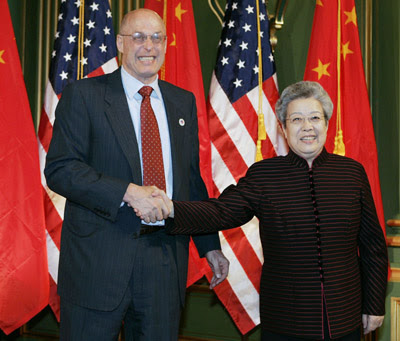 Business Times - 25 May 2007 Sino-US relations finely poised Congress wants China to revalue their currency while Beijing says it is not to blame for the US' rising trade deficit By LEON HADAR WASHINGTON CORRESPONDENT THE minor agreements that were reached during the two days of negotiations between American and Chinese officials in Washington are not likely to change the China bashing mood on Capitol Hill. Democratic and Republican lawmakers continue to consider legislation aimed at 'punishing' Beijing for rejecting US demands that it allow its currency to rise against the greenback. The second of the twice-annual 'Strategic Economic Dialogue' between high-ranking officials led by US Treasury Secretary Henry Paulson and Chinese Vice-Premier Wu Yi concluded on Wednesday with both sides trying to offer a positive spin on the outcome of the talks. Vice-Premier Wu described the negotiations as a 'complete success' and stressed that '
2 comments
Read more
More posts