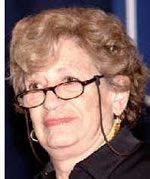 Midge Deceter: Neocon Goddess Andrew Bacevich: Conservative foreign policy intellectual A few years ago (quite a few, as a matter of fact), I was (s)elected as the --- please, don't laugh! -- Shadow Secretary of State of the libertarian Party (and no, I didn't get a "shadow chauffeur" not to mention any "shadow salary"), so when my party organized a conference in Salt Lake City, Utah, I accepted their invitation for the weekend hoping that I'll, well, get lucky. And I had this fantasy of cool and easy libertarian gals who would be fighting with each other over who would have the honor of spending Saturday night with their Secretary of State... What can I say... Most of the attendees in the event were aging nerdy males plus two of three aesthetically-challenged females and they all ended up spending Saturday night arguing over where and when Alissa Rosenbaum (Ayn Rand) and Nathaniel Branden had made out for the first time
Post a Comment
Read more
More posts