My commentary on post-Sharon Israeli politics in Chronicles 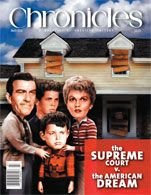 Chronicles magazine has made parts of its March 2006 available online. You can read there (and here) my commentary on Israeli politics in the post-Sharon era: American Proscenium Goodbye, Greater Israel; Hello . . . What? by Leon T. Hadar My name and title (“global-political and economic-affairs analyst”) appears on a few rolodexes on the desks of the young ladies, a.k.a. “schedulers,” who are in search of pundits—that is, pompous think tankers and retired foreign-policy types who are willing “to do Iraq” or “to do Iran” (in Washington lingo) or some other international crisis. So it was not surprising that, when Israeli prime minister Ariel Sharon “remained seriously dead” (as comedian Chevy Chase used to open his fictional “news” segments on Saturday Night Live to report on Generalissimo Franco’s very, very long death watch), I received hysterical phone calls from panic-stricken schedulers asking whether I would be able to “do Sharon” and to discuss whether the world-as-w
Post a Comment
Read more
More posts