The NR issue that WF Buckley missed Yeah... I guess that time flies when you're also having bad time. Very soon GWII could end up being longer than WWII. To mark the anniversary I decided to re-examine the comments I made during an adress before the Middle East Council in Washington on January 2003 a few weeks before the start of the war Following the end of the first Gulf War and the Madrid Peace Conference, there were high expectations in Washington that a new American-led order would be established in the Middle East. The Madrid Peace Conference and the ensuing Oslo peace process were supposed to lay the foundations for a New Middle East: Peace between Israel and a Palestinian state. And the integration of the region into the global economy. Ten years later and it's the same old Middle East. There is a President Bush. There is an Assad. (He does surf the Internet. So perhaps globalization did have some effect.) The ayatollahs are still around. And so are the
2 comments
Read more 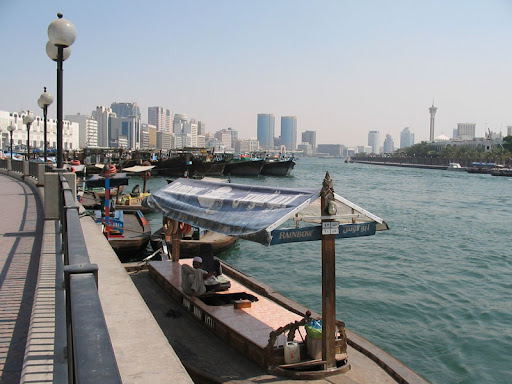 My commentary on the Dubai/ports controversy and what it means (a chllenge to globalization by the rising forces of nationalism), which originally appeared in the Singapore Business Times was posted today in antiwar.com : March 17, 2006 Saying Good Bye to Dubai; Bidding Adieu to Globalization? by Leon Hadar Philip Bobbitt's The Shield of Achilles: War, Peace, and the Course of History (Alfred A. Knopf) received a few glowing reviews when it was published in early 2002 but did not get much attention beyond the confines of think-tanks and academia. Perhaps the book was too heavy for the broader readership (well, with more than 1,000 pages, it certainly was) and it is quite possible that in the aftermath of the Sept. 11, 2001 terrorist attacks on New York and Washington, not a lot of people were interested in reading a Big Picture analysis on the future of globalization. But, in fact, the scenarios about the prospects of globalization drawn up by Bobbitt were – a
Post a Comment
Read more
More posts