Welcome to the Islamic States of America.. 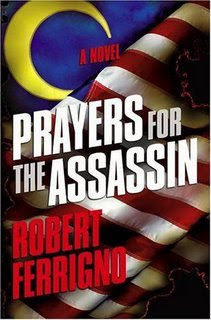 It's 2040 and we are in Seattle, the capital of the Islamic Republic and the second half of the Super Bowl is beginning in Khomeini Stadium. The Warlords are playing against the Bedouins, the cheerleaders are men, and the Super Bowl blimp is drifting above the stadium. Emblazoned on the airship is the flag of the Islamic States of America, identical of the banner of the old regime, except for the gold crescent replacing the stars. If you step outside the stadium you can see the Space Needle lying crumpled, a result of a terrorist attack by agents of the Bible Belt states in the South which has become a Christian refuge, while the Grand Caliph Mosque stands beside the new Capitol. Alcohol has been outlawed although you can still enjoy Jihad Cola. Veiled women hurry through the streets, where Black Robes religious laws enforce religious laws while little girls play with Barbie's with a burka. New York, Washington, DC, and Mecca have been destroyed by nuclear terr
2 comments
Read more
More posts