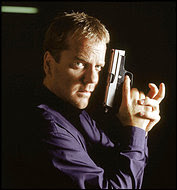 Dr. Strauss on Stop The Spirit Of Zossen ponders the relationship between our popular culture and foreign policy with a special focus on "United 93" and "24" after watching Agent Bauer hijack a plane: All the more reason to be jarred then to come home and watch a recording of last night's Ã‚“24Ã‚”. There, Jack Bauer stowed aboard an airplane, attacked the federal marshal and stole his gun. Bauer then stormed the passenger section, pointing the gun at terrified passengers promising he would shoot them. All the more reason to be stunned when Bauer grabs a stewardess and hauls her terrified down an aisle. In the name of national security and the Ã‚“good guysÃ‚”. An interesting bookend to the earlier experience. Here was mass American entertainment clearly comfortable depicting and inverting the United 93 scenario into a transgressive Bauer moment. At first the thought arose immediately and unbidden, 'is this somehow right?' The emotions from Un
1 comment
Read more
More posts