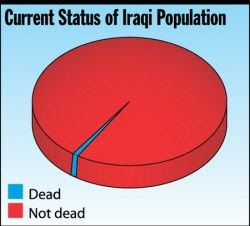 Coalition: Vast Majority Of Iraqis Still Alive (from The Onion) This "news story" was published in The Onion pn June 23, 2005. But the way things are going in Iraq it sounds more and more like real news. Sad. But true. Coalition: Vast Majority Of Iraqis Still Alive June 23, 2004 | Issue 40•25 BAGHDAD—As the Coalition Provisional Authority prepares to hand power over to an Iraqi-led interim government on June 30, CPA administrator L. Paul Bremer publicly touted the success of Operation Iraqi Freedom. "As the Coalition's rule draws to a close, the numbers show that we have an awful lot to be proud of," Bremer said Tuesday. "As anyone who's taken a minute and actually looked at the figures can tell you, the vast majority of Iraqis are still alive—as many as 99 percent. While 10,000 or so Iraqi civilians have been killed, pretty much everyone is not dead." According to U.S. Department of Defense statistics, of the approximately 24 mill
3 comments
Read more
More posts