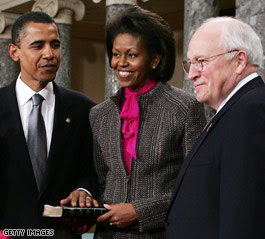 (with his "pro-Israeli" cousin "Dick") Last month I predicted that Hillary and Company would end-up trying to "Louis-Farrakhaning" Obama , especially by raising doubts about his commitment to Israel. And...fastforward to the new issue of Newsweek where "Good for the Jews" points out that "Hillary Clinton's surrogates are questioning Obama's commitment to U.S.-Israel relations." I guess that some things are inevitable. And this: Business Times - 26 Feb 2008 Change US foreign policy dramatically? No, They Can't By LEON HADAR WASHINGTON CORRESPONDENT I HAVE been receiving a lot of emails from friends from around the world who may have been following the US presidential primaries races with more intensity than some of my colleagues in Washington. Most of the inquiries were about how each presidential candidate would act as US president towards the inquirer's own country and/ or geographical region. It mig
Post a Comment
Read more
More posts