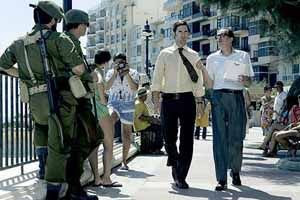 Avner Kauffman (Eric Bana) in 'Munich': A Jew Returns to Exile Ari Ben Canaan (Paul Newman) in 'Exodus': An Aryan Zionist Hero There is quite of an interesting selection of movies for American audiences to watch in this family-friendly Christmas Season: A love affair between two gay cowboys ( Brokeback Mountain ). The memoirs of a Japanese prostitute ( Memoirs of a Geisha ). A story about an Irish tranvestite cabaret singer ( Breakfast at Pluto ). Two Jewish producers making a musical about Hitler ( The Producers ). A comedy about a sex addict ( Casanova ). And, yes, a tale of Jewish vengeance ( Munich ). I saw 'Brokeback' and my guess is that it will sweep the Oscars (great directing, acting and photography; a so-so storyline). I loved the old Mel Brooks' 'Producers' with Zero Mostel and Gene Wilder; so why see a remake? I'll probably see 'Casanova" and 'Geisha' (although it's kind of funny when reviewers sug
Post a Comment
Read more
More posts