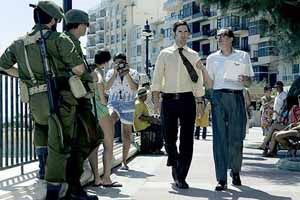 
There is quite of an interesting selection of movies for American audiences to watch in this family-friendly Christmas Season: A love affair between two gay cowboys (Brokeback Mountain). The memoirs of a Japanese prostitute (Memoirs of a Geisha). A story about an Irish tranvestite cabaret singer (Breakfast at Pluto). Two Jewish producers making a musical about Hitler (The Producers). A comedy about a sex addict (Casanova). And, yes, a tale of Jewish vengeance (Munich). I saw 'Brokeback' and my guess is that it will sweep the Oscars (great directing, acting and photography; a so-so storyline). I loved the old Mel Brooks' 'Producers' with Zero Mostel and Gene Wilder; so why see a remake? I'll probably see 'Casanova" and 'Geisha' (although it's kind of funny when reviewers suggest that 'Geisha' is not "as good as the book," as though Arthur Golden's sugary romance novel was a classic or something). And I'm not sure about 'Pluto.' But I was standing first in line to buy tickets for 'Munich' especially after two prenetious and shallow writers, the New York Times' house neocon David ("Bush is Never Wrong") Brooks (no relationship to Mel, I think) http://select.nytimes.com/2005/12/11/opinion/11brooks.html and this guy who publishes a a crusading anti-Jihadist column in the lively Asia Times, called "Spengler" (yeah; and I'm Kant) who urges Christians and Jews to have a lot of kids so as to ensure that the Moslems won't inherit the earth http://www.atimes.com/atimes/Front_Page/GL13Aa02.html panned Steven Spielberg new masterpiece.
Yes, it's a masterpiece. And I'm not going to do a movie review here. I agree with Manohla Dargis (and people have a problem with my name...) in the Times http://movies2.nytimes.com/2005/12/23/movies/23muni.html that's it's a "slammin' entertainment filled with dazzling set pieces and geometric camerawork" with some sequences that find Spielberg, as the reviewer puts it, "outdoing Hitchcock" (now, that's a compliment, like saying that someone was outdoing Shakespeare or Tolstoy).
And as far as the "message" or "messages" that the movie is conveying. If you've read Brooks, you already know that that fighting chickenhawk accuses Spielberg of undermining the war on terrorism and of drawing a mroal equivalence between the Israeli killers and the Palestinian killers. There are two scenes in the movie -- Prime Minister Golda Meir hugging Avner, the young Mossad agent, before sending him on a killing spree in Europe and another one in which Avner's mother (played by the great Israeli actress Gila Almagor) insists that although she admires her son's patriotic endeavors, she still doesn't want to know what exactly he is doing -- which reminded me of that old Jewish joke: In late 19th century Russia, a Jewish mother huggs her son before he joins the Russian army to fight the Turks. "Take care of your health," she tells her son. "Kill a Turk -- and then rest." "But, mon, if I kill a Turk, another Turk willl try to kill me," the son suggests. And his adoring Jewish mother responds: "But, my son, why would anyone want to kill a nice Jewish boy like you." No moral equivalence, please...
Re: Underming the war on terrorism, the American war in Iraq, etc. One of my favorite movie reviewers, Stephen Hunter focuses on these issues and the moral dilemmas of war and revenge in the Washington Post http://www.washingtonpost.com/wp-dyn/content/article/2005/12/22/AR2005122202142.html So I'm not going to get into that so much here. Instead, let me touch on the Israeli or Zionist angle in the movie which most reviewers have missed when it comes to 'Munich' as well as to a 2004 Israeli movie that was shown last year in the United States, 'Walk on Water' (which is also about a Mossad agent whose mission in Europe leads him to abandon Israel and the entire Zionist project; in 'Water' there is also a hint of conversion to Christianity).
One should probably recall Leon Uris' 'Exodus' which was turned by Otto Preminger into a 1960 movie starring Paul Newman as Ari Ben Canaan, one of the leaders of the Zionist underground fighting the British and Arabs to win Israel's independence in 1948. Newman looks in 'Exodus' so, so different than the typical wimpy and nerdy "Diaspora Jew," so manly, in fact, so Aryan, so confident in his mission and in the entire Zionist ethos. The Arabs, on the other hand, are depicted as victims of their own corrupt and bloody leaders who incite them to kill innocent Jews. It's interesting that in 'Munich" the Israeli hero, or anti-hero (played by Australian Eric Bana), unlike Ben Canaan has a non-Hebrew/ German-Jewish last name (Kauffman). At the start of the movie, we are under the impression that, indeed, Avner-Bana, like Ari-Newman, will prove to be an Israeli James Bond defeating the Bad Guys; perhaps, we'll even get to see Golda hugging him in the last scene of the movie thanking him on behalf of every Jew (I think that many of the American-Jewish viewers have these expectations). But it doesn't work that way. Not at all. Avner seems to be losing his confidence in his Israeli superiors and in the Zionist ideals that are forcing him and an entire generation of young Israelis to spend (waste?) their entire lives fighting a war that would never end, certainly if the "Goldas" would remain in charge (and forget the moral equivalence crap: no one leaves the film with a lot of sympathy for the Arab/Palestinian side). There is a scene in the movie in which Avner is standing in front of a store selling home and kitchen furniture and you sense the longing for a normal middle-class life. And at the end of the movie, he seems to be reaching that Promised Land of "normality" in Brooklyn, NY. In a way, he is returning to the Diaspora. I don't think that Spielberg or Tony Kushner and Eric Roth who wrote the script, have produced an "anti-Zionist" film. It's a very pro-Israeli and even pro-Zionist film in a sense that it de-romanticize the Zionist project and reveals to us that Ari Ben Canaan doesn't live in Israel anymore.