Making the case for "To Hell with Afganistan" hawks

. In the new issue of the National Review Richard Lowry addresses "The ‘To Hell with Them’ Hawks" who he describes as "conservatives who are comfortable using force abroad, but have little patience for a deep entanglement with the Muslim world, which they consider unredeemable, or at least not worth the strenuous effort of trying to redeem" and wh "want to detach Bush’s Jacksonianism from his Wilsonianism." According to Lowry, this "tendency is problematic and, in its own way, as naïve and unrealistic as Bush at his dreamiest." In another conservative magazine, I've discussed the rising anger among conservatives over the Global Democracy project here and suggested why the plans to "democratize" the Middle East are unrealistic and are not advancing U.S. interests here . I think that the recent I-cannot-believe-this reaction in the U.S. and the West to the news about the Afghan man who had been facing the death penalty f
4 comments
Read more 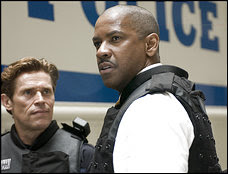 I saw Spike Lee's Inside Man over the weekend and was thinking of writing something about it, but then I read Steve Sailer's review: Good movie. It's a heist flick with Clive Owen playing the genius bankrobber who takes 50 hostages, Denzel Washington as the NYPD negotiator who slowly figures out the bankrobber has memorized the police manual that he's been working from, and Jodie Foster in a supporting role as a shady fix-it lady for the rich powerful who is hired by the owner of the bank (Christopher Plummer) to prevent the bankrobbers from getting incriminating documents in the vault. Meanwhile, every ethnicity in New York is barking amusing insults at each other. My wife says, "It's 'Crash' with a plot." More Since Steve raised the comparison between Spike Lee and Woody Allen, let me just add that critics of the first have accused the black New Yorker of highlighting negative streotypes of Jews in some of his movies (notably the Jew
1 comment
Read more
More posts