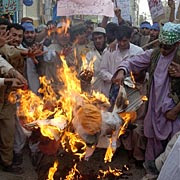 Last night (Tuesday, September 12)I took part in a debate sponsored by The Donald & Paula Smith Family Foundation on the following issue: Responding to Anti-Americanism in the Arab World: Have We Been Effective Since 9/11? The debate took place in Manhattan, at The Graduate Center of The City University of New York on Fifth Avenue. I was suppposed to represent the libertarian/non-interventionist position. David Frum, from the American Enterprise Institute was invited to present the neoconservative view, while Craig Charney, President of Charney Research which studies Arab attitudes towards the United States provided a more centrist perspective. We had a good audience of about 200 people and there were some provocative question. The debate was heated but civilized and extended into a dinner. Here are some of my opening remarks which give you an idea about my line: I remember landing in New York City for the first time about thirty years ago, and then driving into
Post a Comment
Read more
More posts