What to do about Iran? 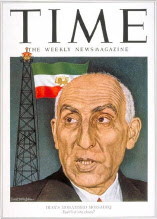 All things considered...I'd rather have "Mossi" The Eurasia Group warned this week that the nuclear stand-off with Iran was the "greatest source of political risk in 2006" and could lead to military strikes by the U.S. and/or Israel in early 2007. Readers of my column are aware that I put my own credibility as a political analyst on the line and made the same prediction this week,that "the news this year will be dominated by the growing confrontation between Washington and Tehran" (and to think that the guys in this respected international consulting group probably spent several weeks and received a lot of bucks to come up with this forecast; I won't reveal to you how much I get paid for my column...). In fact, there was a very interesting op-ed piece in Thursday's New York Times in which the two authors make very similar arguments to the ones I raised in my column, especially with regard to the perception by the I
1 comment
Read more
More posts