Rumsfeld in another "surprise visit" to Iraq... 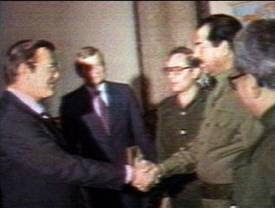 According to Reuters Rumsfeld makes surprise visit to Baghdad : Defense Secretary Donald Rumsfeld sought to show U.S. support for Iraq's new leadership on Wednesday, making a surprise visit to Baghdad just days after Shi'ite politician Jawad al-Maliki was chosen as prime minister. Rumsfeld swooped into the capital aboard a military cargo plane for his first visit to Iraq in 2006. In addition to Iraqi political developments, Rumsfeld's trip comes as U.S. military commanders contemplate reducing the number of American troops in the country in the coming months. There are about 132,000 American troops in Iraq at present. Rumsfeld indicated earlier this week that the Pentagon intended to stick with plans to reduce the size of the U.S. military presence, but he gave no specific numbers nor a timetable. Opinion polls show U.S. public support for the three-year-old Iraq war eroding, which is contributing to a drop in President George W. Bush's job approval ratings. Ru
Post a Comment
Read more
More posts