Two who are challenging the Don't-Mention-the-War Democrats 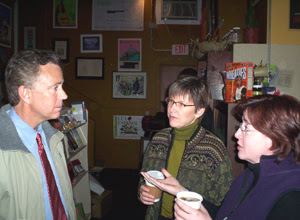 I'm Shocked! Shocked! Shocked! According to this Washington Post report today, a recent opinion poll offered some hopeful signs for Bush and the Republicans as they prepare for the midterm elections. The big advantage that Democrats held on virtually every major issue has narrowed or reversed. On the question of which party is best able to handle the situation in Iraq, the Democrats' 14-point advantage in last month's Post-ABC poll has been cut in half; they now have a 47 percent lead over Republicans' 41 percent. A month ago, Democrats held a five-point lead over Republicans on dealing with international terrorism. Republicans now hold a seven-point advantage. On the economy, the Democratic advantage has narrowed from 18 points to 13 points since May. And the poll also found that the the public gives both Bush and the Democrats low marks on having a plan for success in Iraq. Almost two in three (64 percent) said Bush does not have a clear plan, while almo
5 comments
Read more
More posts