Why Bush is bad for Israel (and America) 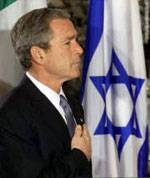 I've been arguing for a very long time that the neoconservative agenda pursued by the Bush Administration, including the war in Iraq and against the backdrop of the Israeli-Hizabollah war, are hurting and not advacing long term Israeli national interests. See for example, my two commentaries in The American Conseravtive , Bad For You Too? How the Iraq War disappointed Israel and Special Relationship: A one-sided U.S. policy toward Israel endangers both countries’ interests. Now comes Gregory Levey in Israel's surge of despair: Top Israeli officials admit last summer's war against Hezbollah was a failure -- and denounce President Bush's actions in the Middle East on Salon.com (via Dr. Strauss)and makes the same point. Interesting and depressing read.
17 comments
Read more

I'm movie buff and a political junkie who is a fan of spy literature (fiction and non-fiction). So it's not surprising that went to see and enjoyed Breach in which Chris Cooper does a fantastic job playing the Robert Hanssen, the FBI agent who was convicted of selling secrets to the Soviet Union. To say that Hanssen was (is) a complex character is an understatement. A self-proclaimed patriot and anti-communist ideologue who betrayed his country spying for Moscow and a devout Catholic who engaged in kinky sex. Cooper captures all of that in a way that explains (to some extent) why he was able to deceive everyone and for so long. Director Billy Ray gets our attention without exploiting the material: no kinky sex or car chase scenes and very little violence. But yet everything hits you straight in the face. Bottom Line: Why did Hanssen do it? Certainly not for ideology. While money probably played a role, the main reason had to do with boredom and ego. The guy felt suffoc
5 comments
Read more
More posts