Mearsheimer and Walt take on AIPAC 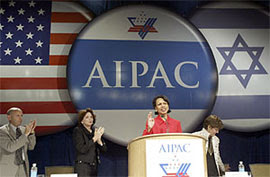 It's an intellectual bombshell. John Mearsheimer and Stephan Walt, two respected realist political scientists launch a frontal attack on the Israel Lobby in the recent issue of The London Review of Books . It's a very comprehensive and intelligent critique of AIPAC and the influence it exerts on U.S. policy in the Middle East: The Israel Lobby John Mearsheimer and Stephen Walt For the past several decades, and especially since the Six-Day War in 1967, the centrepiece of US Middle Eastern policy has been its relationship with Israel. The combination of unwavering support for Israel and the related effort to spread ‘democracy’ throughout the region has inflamed Arab and Islamic opinion and jeopardised not only US security but that of much of the rest of the world. This situation has no equal in American political history. Why has the US been willing to set aside its own security and that of many of its allies in order to advance the interests of another state? One mig
3 comments
Read more

Why President Cheney is having the last laugh?

Is it possible that Cheney and his aide John Hannah are reading out loud the first sentence -- "The Dick Cheney era of foreign policy is over" -- in Look Who's Running the World Now which was published in The Washington Post over the weekend? In the article, one of Washington's leading brown nosers, David J. Rothkopf, asserts that "Cheney's influence has waned in the White House" since President Bush no longer depends on the vice president as he did in the days after Sept. 11, 2001, when Bush was still learning national security on the job and the nation was in crisis. The president today is better schooled [?] , more experienced and more confident. Second, Rumsfeld, who is Cheney's staunchest supporter after the president and whose vacation home is just a few steps away from Cheney's on Maryland's Eastern Shore, has lost a lot of his clout. No longer the center of attention, as he was during the offensives in Afghanistan and
1 comment
Read more
More posts