How to Handle Hamas? 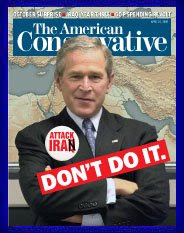 For some reason my earlier post which carried my analysis, "How to Handle Hamas: The Holy Land needs a more modest peace plan. Think Cyprus," which appeared in The American Conservative , April 10, 2006, "disappeared." So here it is again. Just click on the images below:
Post a Comment
Read more

The director of the Center for Middle East Policy at the Hudson Institute, Likud propagandist Meyrav Wurmser has published an analysis of the recent Israeli elections in the NRO ( Should I mention that she is also the wife of shady neocon/Likudnik figure, David Wurmser) which is so stupid -- as well as poorly writen (do they edit stuff at NRO?) -- that it deserves special attention by yours truly: Israel's recent elections occurred in the context of significant, even monumental ,["significant, and even monumental..." like "bad, and even horrible..."] questions facing the Jewish nation [and I thought that this was an election in which Israeli citizens, including more than 20 percent Arabs and at least 10 percent "others," that is, non-Jewish citizens vote. Do American-Jews belong to the "Jewish nation?" Is there an election in which members (citizens?) of the "Jewish nation" vote?] Israel faces grave threats from Hamas&
Post a Comment
Read more
More posts