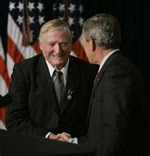 WFB and unhappy friends The founder of the National Review and author of horrible fiction has concluded that One can't doubt that the American objective in Iraq has failed He discusses the Bush Administration's "postulates" in Iraq, "postualte" being according to the dictionary, "something assumed without proof as being self-evident or generally accepted, especially when used as a basis for an argument." A problem for American policymakers — for President Bush, ultimately — is to cope with the postulates and decide how to proceed. One of these postulates, from the beginning, was that the Iraqi people, whatever their tribal differences, would suspend internal divisions in order to get on with life in a political structure that guaranteed them religious freedom. The accompanying postulate was that the invading American army would succeed in training Iraqi soldiers and policymkers to cope with insurgents bent on violence. This last di
1 comment
Read more
More posts