Dr. Strauss provides comments on this celebration of anarchy on Stop The Spirit Of Zossen : The original's anarchist view (the V and the 1980s “A” for anarchy not accidentally similar) is and was self indulgently childish — especially when the reality Moore railed against is now so much more immediate than his overcooked imaginings just twenty years ago. Apropos "A" for Anarchy check out the "A" is for Anarchy in the Wall Street Journal . It's an interesting review/history of the anarchist movement by Todd Seavey. What Seavey and others fail to point out is that "V" is not fighting against a middle class liberal democratic regime but against a Fascist dictatorhsip. Would he label the partisans fighting against the Vichy regime in France as "anarchists?" And it's not surprising that the Tory Anarchist aka Daniel McCarthy gave it "V for … Very Good, Actually:" Glamourized sadism is an apt descripti
Post a Comment
Read more

My piece on the Dubai controversy in The American Conservative 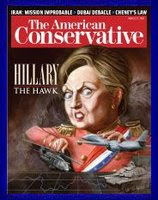 My article on the Dubai controversy which has been published in The American Conservative is now available online: March 27, 2006 Issue Copyright © 2006 The American Conservative Six Ports and a Storm The Dubai debacle shows Americans looking inward. By Leon Hadar It’s not every news cycle that the columnists for the anti-interventionist Antiwar.com and for the internationalist op-ed page of the New York Times find themselves echoing the same line-of-the-day spun by the media masters of George W. Bush’s White House. Those lawmakers who have criticized the Bush administration’s decision to allow a company owned by the government of Dubai —which is part of the United Arab Emirates—to purchase a British company, Peninsular & Oriental Steam Navigation—which now has the contract to operate six major U.S. ports—were “Kicking Arabs in Their Teeth,” screamed the headline of a column by the Times’ in-house neoconservative David Brooks, a staunch supporter of the war in Iraq. Me
Post a Comment
Read more 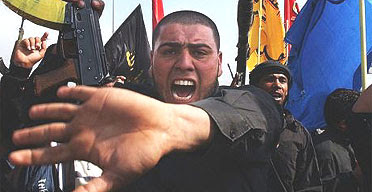 Civil War Not A Civil War The Washington Note is providing us with an overview of the propaganda campaign led by The Cheney-led Civil War-Deniers to try to convince us that indeed what's going on in Iraq is not a civil war but just examples of honest disagreements between a few alpha males taking place in Liberated/Free/Democratic/New Iraq. The most pathetic example of these efforts that don't seem to affect the majority of the American people has been the series of dispatches from Iraq by Ralph Peters that seem to suggest that, well, forget Provence and Tuscany; choose Iraq as your next vacation destination. Well, if it looks like a civil war, and if it sounds like a civil war, it's a Civil War. That at least is the conclusions of two former U.S. intelligence guys. Larry Johnson in Smells Like Civil War? explains and illustrates: Is there a civil war in Iraq? Let's imagine that the events, which happened on Sunday, March 12, 2006 in and around
Post a Comment
Read more
More posts