Showing posts from December 8, 2006
Show all 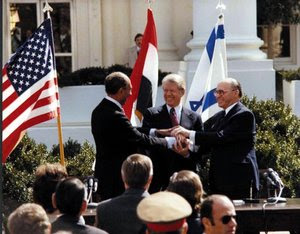 I haven't read Jimmy Carter's new book, Palestine: Peace not Apartheid," and I'll probably browse during my weekend visits to Border's and Barnes&Noble. But I did follow all the angry reactions including in Jimmy Carter, Palestinian Sympathizer in which Alan Dershowitz is quoted saying that "It's obvious that Mr. Carter just doesn't like Israel or Israelis" while Marty Peretz predicts in the magazine his wife had bought him once that Carter "will go down in history ...as a Jew hater." In my Special Relationship: A one-sided U.S. policy toward Israel endangers both countries’ interests which was published in the American Conservative I refer to Carter: Indeed, Washington’s ability to play the role of an honest broker between Israel and Egypt (and Syria) after the 1973 Middle East War was only made possible when Richard Nixon re-established diplomatic ties with Cairo, co-opting it into the pro-American camp. It was the
17 comments
Read more
More posts