The truth about Condi

Pic from Time magazine Some of the critics of the Bush Administration's Iraq War/foreign policy insist on portraying Condi Rice as the "good guy/gal" in the administration, the anti-Cheney/Rumsfeld, if you will. This attitude stems probably from an infatuation with a media star, an interest in demonstrating that "we are not really Bush Administration haters," as well as from a politically-correct-driven concern about bashing a powerful Africa-American/female public figure. I've been arguing that the Lady is a Light-Weight and that she has been a total dissaster both as a National Security Advisor and a Secretary of State. In fact, she is probably the worst Secretary of State in U.S. history (please, read my earlier columns for a explanation). In any case, Sidney Blumenthal has a great analysis of Condi in the Guardian The tethered goat strategy which details our chief diplomat's efforts to silence U.S. diplomats about the mess in Iraq.
Post a Comment
Read more

On the immigration debate: It's the Latinos, Stupid! 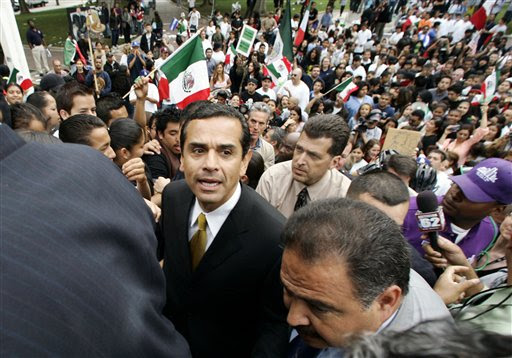 The Cato Institute with which I'm affiliated as a research fellow in one of the leading pro-immigration think-tanks, while the American Conservative for which I write as a contributing editor wants to place restrictions on immigration. So... I've chosen a neutral forum, the Singapore Business Times to publish my analysis of the current immigration debate. There is no doubt that economics plays a role in this debate. It's not surprising that American businesses support a more open immigration policy and as a classical liberal I tend to sympathize with their position. But... it seems to me that much of the opposition to immigration in the United States and in Europe (with regard to Arab and Moslem immigrants) has to do less with economics and more with such core existential issues as national and cultural identity. One could use terms like "xenophobia" to dismiss concerns among Americans over the reality in which many Latino immigrants aren't assim
1 comment
Read more
More posts