In the new Vanity Fair . The most comprehensive treatment of this pompous pseudo-intellectual/pseudo-Fascist/pseudo-spy and all his lies and scheming.
2 comments
Read more 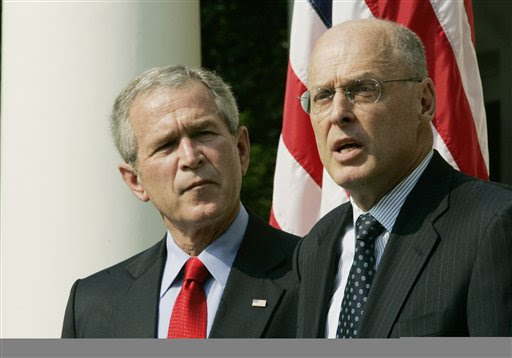 My analysis in the Business Times of Bush's decision to nominate Wall Street Big Shot Hank Paulson as his new Treasury Secretary (online access to the BT website is restricted. So I'm pasting the entire piece here): Business Times - 06 Jun 2006 Would Paulson be Bush's Rubin, or another Powell? The credibility of the new Treasury Secretary in financial markets is his major political asset By LEON HADAR WASHINGTON CORRESPONDENT IF ONE had to point to the most powerful member of former US president Bill Clinton's Cabinet, the consensus among most Washington observers and historians would be that the dominant figure was not anyone responsible for managing US national security or foreign policy but its leading economic player, Treasury Secretary Robert Rubin. Indeed, during the boom years of the 1990s, it was Mr Rubin, a former Goldman Sachs CEO, who helped Mr Clinton manage the dangerous global financial crisis that threatened to unravel the global economy.
2 comments
Read more
More posts