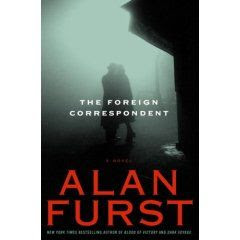 Politics & Prose , my favorite bookstore in the Washington area,hosted a special book event with Alan Furst to mark the publication of his new The Foreign Correspondent. Here is what Janet Maslin had written about it in the New York Times : At the beginning of Alan Furst's new novel, the editor of a clandestine Italian anti-Fascist newspaper is assassinated. This is a terrible crime. But it could have been worse. The editor dies in Paris, in the midst of one of his Tuesday assignations with the wife of a politician, at the "rather subtle" Hôtel Colbert, a discreet place well-suited to "amours conducted between 5 and 7, those flexible hours of the early evening," though the editor and his mistress prefer a later hour. Never let it be said that Furst's urbane European spy stories do not know how to mix love and war. The killing that sets "The Foreign Correspondent" in motion is quietly overseen by a silver-haired Italian
Post a Comment
Read more
More posts