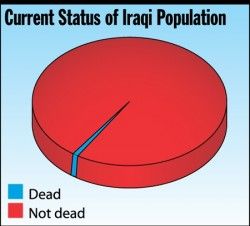 Coalition: Vast Majority Of Iraqis Still Alive (from The Onion)


This "news story" was published in The Onion pn June 23, 2005. But the way things are going in Iraq it sounds more and more like real news. Sad. But true.

BAGHDAD—As the Coalition Provisional Authority prepares to hand power over to an Iraqi-led interim government on June 30, CPA administrator L. Paul Bremer publicly touted the success of Operation Iraqi Freedom.
"As the Coalition's rule draws to a close, the numbers show that we have an awful lot to be proud of," Bremer said Tuesday. "As anyone who's taken a minute and actually looked at the figures can tell you, the vast majority of Iraqis are still alive—as many as 99 percent. While 10,000 or so Iraqi civilians have been killed, pretty much everyone is not dead."
According to U.S. Department of Defense statistics, of the approximately 24 million Iraqis who were not killed, nearly all are not in a military prison. Bremer said "a good number" of those Iraqis who are in jail have been charged with a crime, and most of them have enjoyed a prison stay free of guard-dog attacks, low-watt electrocutions, and sexual humiliation.
U.S. Brig. Gen. Mark Kimmitt explained the coalition's accomplishments in geographical terms.
"There are vast sections of the country where one can go outside unarmed during the daylight hours," Kimmitt said, speaking from a heavily guarded base outside of Baghdad. "Even in cities where fighting has occurred, many neighborhoods have not been torn apart by gunfire. And, throughout the country, more towns than I could name off the top of my head have never been touched by a bomb at all."
Kimmitt said the bulk of the nation's public buildings are still standing.
"Throughout the nation, four out of five mosques have not been obliterated," Kimmitt said. "That's way, way, way more than half. Also, 80 percent of the nation's treasures and artifacts have not been destroyed by artillery or stolen in the widespread looting. If we were in school, that'd be a B-minus."
Halliburton executive vice-president and CFO C. Christopher Gaut described the progress of his company's reconstruction efforts.
"Of the millions of civilian homes that are still standing, many have electricity for hours each day," Gaut said. "The loss of $200 million in profits resulting from oil-line sabotage pales in comparison to the millions of dollars that remaining lines are generating. And a good portion of southern Iraq currently has access to fuel. Once we get the lines in the north repaired, oil fields will be operating at more than two-thirds of their former capacity."
Gaut added: "Many of the hospitals have reopened, and a good number of the schools have started holding classes at regularly scheduled hours, too."
Charles Sawyer, a State Department official serving as a liaison between coalition forces and the Iraqi interim government, said that no Americans have been killed in Fallujah since the coalition ceded control of the region to an Iraqi brigade.
"Less than 10 contractors have been murdered, publicly mutilated, or had their remains hung from a bridge since the end of March," Sawyer said. "And nearly three quarters of the foreign-born contract workers taken hostage in the last six months have not been killed. Also, contrary to headlines that claim there are problems with Iraq's internal law enforcement, more than half of Iraqi police officers have not deserted."
U.S. Army Gen. John P. Abizaid gave a positive assessment of the status of U.S. troops in Iraq.
"Yesterday alone, 137,980 American troops were not killed," Abizaid said. "All in all, if we keep on like this, more than 90 percent of the brave men and women serving in Iraq will return home to see their families again."
Iraq's new prime minister, Iyad Allawi, agreed that the situation in his soon-to-be-independent nation is improving.
"Of the 25 members of the Iraqi Governing Council, 23 survived until the group was replaced last month," Allawi said. "Nine out of 10 times, death threats against those who cooperate with coalition efforts do not end in actual murders."
However, Allawi added that, despite the wishes of most of his countrymen, the vast majority of American troops deployed to Iraq are still there.

Dr Leo Strauss said…
It is possible that this meme will be used as:

(a) When we began to leave in 2006 they were mostly still alive;
(b) There is civil war now (which we can admit because we are leaving);
(c) The Iraqis did not deserve the Freedom we gave them; and
(d) The Iraqis lost faith because of the Stab in the Back by Democrats, defeatist isolationists, anti-semites, gay cowboys and Janet Jackson's breast.
8:24 PM

Leon Hadar said…
Or (e) The Iraqis didn't deserve such an enlightened and benign occupation like ours;
(f)The fact that most of them are still alive reflect a failure of resolve on their part.
9:35 PM

Gothamimage said…
What if we followed George Aiken's advice in 1965 and declared victory in Vietnam and then left.

If the VC then won the war, a few years hence, then many people would still be saying that if we only stayed un Vietnam until 1967 or 1968, then we would have pevailed, etc.

If we pull out of Iraq, as Gen. Odom suggests, then Iraq will probably fall into tragedy (but it probably will anyway) - This will help the GOP, because they will have a new mythos of betrayel. There will be much talk about how Iraq was just about to turn the corner, but the Dems connived to betray them by getting blogs to undermined the will of the GOP congress and Pres. The absence of evidence will be irrelevant. It will all be based on the evidence of absence. Hannitynation.
8:51 PM