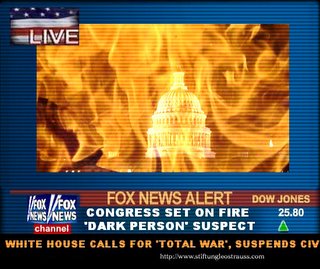 Topping the list of movies that I consider to be "great" are "Citizen Kane," The Third Man," "Lawrence of Arabia" and "Vertigo" (on a second thought, well, all of Hitchcock films). Now if you ask me to explain to you why those movies are "great," I couldn't really give you a simple answer. Which would be my response if you would ask me why I consider the "leo Strauss Stiftung" wesbite http://stiftungleostrauss.com/ and its brother blog, "The Spirit of Zossen" ak.a. The Bunker http://www.stiftungleostrauss.com/bunker.php to be "great." You'll just have to trust me on that. The site which is "dedicated" to Jewish German-American philosopher Leo Strauss (above from the site), who allegdly ispired Paul Wolfowitz and other neocons is too good to be real. I've been spending several hours surfing the site which provides you with such "goodies" as a podcast featuring "Chalabi visiting AEI" or a screenplay about how Cheney is dealing with Libby ora poll asking you to vote on who "are the greatest threats to empire," with the choices include "Brent Scrowcroft -- Ancien Regime Reactionary" and "Chuck Hegel -- Party Traitor." I chose "The American People -- They Failed the Endless War." Or how about the above parody of Fox News? Imagine being trasported to Moscow at the heyday of the Soviet Empire and Monty Python would be launching a website making fun of Stalin, Molotov, Beria, etc. (I'm not using the other historical analogy). You get the idea. It's really great!