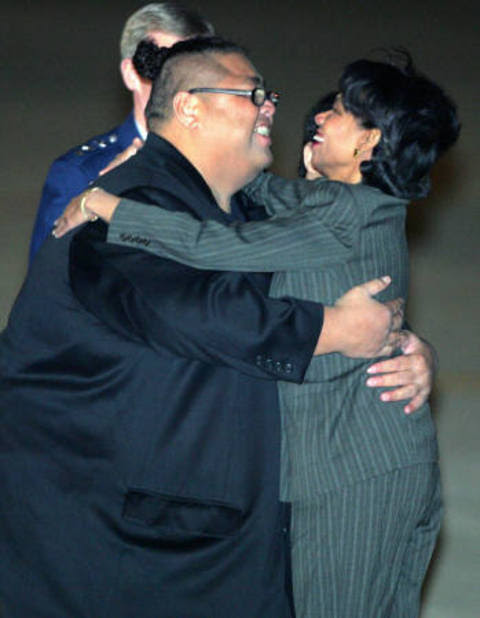 She Ain't Heavy, She's My Secretary of State

In a recent column in the posted on antiwar.com, "The Unbearable Lightness of Being 'Condi,'" http://antiwar.com/hadar/?articleid=6689 I suggested that our secretary of state Condoleeza Rice is kind of a, well, lightweight, especially when you compare her to predecessors like, say, George Marshall, John Foster Dulles, Dean Acheson, and of course, Henry Kissinger. Yes, I expected some criticism. But you should have read some of the hate email I've been receiving. I've been accused of, among other things, being a racist and a misogynist, who isn't capable of dealing with the reality of strong women, and a powerful African-American female at that. "You probably hated your mommy," suggested one reader. You get the idea. But no apology from moi, guys. I'm an equal opportunity basher, and proud of being one. As Princeton Professor L. Carl Brown, noted in a review of my earlier book Quagmire: America in the Middle East (see my links): "Hadar provides a consistently tough-minded and skeptical examination of the public pities that pass for policy. His approach reminds of the late Vince Lombardi about whom one of his players observed 'He is very fair. He treats us all like dogs.' Such is the Hadar touch." Indeed, many of the neocons, who happen to be members of my own Hebrew tribe, have been grilled to death in my new book, Sandstorm: Policy Failur in the Middle East (see my links). So if I think that America's top diplomat, who happens to be a black female, has done a lousy job, I'm going to say so (And I love you, mom!). In fact, as a national security advisor Rice was a disaster of historic proportions. She was responsible for the advice reaching the White House and for the disinformation coming out of it before 9/11 and in the months leading up to the war in Iraq, and had failed to coordinate the Bush administration's preparation for the postwar occupation of the country. Now she seems to be managing U.S. foreign policy, a reward for a job well done, as a Paris Hilton-style television reality show, with her uninterrupted globetrotting covered 24/7 by the embedded and sycophantic media. I know that the job of a secretary of state is to travel around the world and that her predecessor Colin Powell was criticized for spending too much time in Foggy Bottom instead of schmoozing with Dominique de Villepin in Le Quai d'Orsay. Between you and me and this weblog, face time with foreign officials is over-rated. In this day and age of internet and teleconference much of our diplomatic business can be done today without leaving home. But if Madam Secretary insists that face-to-face encounters do make a difference, she doesn't seem to be delivering much except for a lot of hot air, like those uninspiring and phony sermons on Freedom in Cairo and Riyadh and sounding sometimes like a kindergarten teacher warning rowdy kids in Beijing and Moscow that if they won't behave, they could end up standing in the "Axis of Evil" corner. It's true that Dr. Kissinger had spent his time flying non-stop around the world. And Dr. Rice could certainly learn something from her predecessor. It's called "secret diplomacy," Ma'am. Much of Dr. K.'s achievements - the opening to China, the Middle East Shuttle Diplomacy, Detente with the Soviets - resulted from long and risky behind-the-scenes negotiations that required intelligence and skills. The media events - President Nixon's visit to China, the Egyptian-Israeli accords, Soviet-American summits - crowned those achievements. P.R. wasn't an end in itself.
But it seems that P.R. has become an end in itself as far as Condi and the State Department are concerned. In fact, the State Department has emerged as a huge P.R. machine, according to a recent piece in the New York Times, "The Man Behind the Secretary of State Rock Star Image" http://www.nytimes.com/2005/12/05/politics/05rice.html According to State Department correspondent Joel Brinkley, "a fast-talking jokester and the son of a funeral director from Macogdoches, Texas" (Not that there anything wrong with that...) who sits in a small office accross from the hall from the Secretary of State's suite is the guy in charge of setting up here "image-making events." According to the article, "During her frequent foreign trips, [Wikinson] attends nearly all of her official meetings. He talks to her several times a day and is constantly looking out for image-making opportunities." Yes, a pseudo-secretary of state in charge of pseudo-diplomacy who produces pseudo-events. Meanwhile, in the real world -- Iraq, Iran, North Korea, China, Latin America -- what are the real achievements by our top diplomat?
I do hope that someone in the State Department has been taking notes. Perhaps one day we'll learn that while I was scribing these anti-Condi diatribes, American and Iranian officials were meeting secretly in Delhi and negotiating the resumption of diplomatic ties, or that one of Rice's aides was in Pyongyang putting the final touches on an agreement with the North Koreans. Sometimes, not seeing is believing. But I'm not holding my breath.

Gothamimage said…
Leon - You're writing is excellent - I wish I took a class from you - Have you read Condi's 911 testimony? It was ALL PR lines, filled with falsehood.

Do want to know what Bush and Christopher Hitchens might be "talking" about?

Stop by our blog and read the Secret Bush Script!
12:24 PM

Leon Hadar said…
Thanks for the kind words. Youve made my day. Your own blog is great. The exchange was very clever and funny. Leon
4:40 PM

Anonymous said…
She's a complete lightweight who skates on the protection from criticism that being African-American gives her. Being one of Bush's closest confidantes gives added protection, so few "respectable" writers will say the truth that's in front of us all.

Anonymous said…
Holy moly. Just read the linked NYT article and realized that Wilkinson is the same clown that was in charge of the Doha press center during the Iraq war (during which he wore a uniform to which he was not entitled). He's apparently a big believer in sets and costuming. (Though I have to tip my hat to whoever picked that red dress.)
Nell L.
10:24 AM

Clifford said…
Really helpful data, thank you for the post.
English Saddle | sex with wife | maps of the USA
11:14 AM