My new piece in the American Conservative 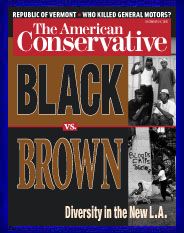 My article on Karen Hughe's Mission Impossible which was published in the December 19, 2005, issue of The American Conservative is now available on the internet:

A few years ago, I participated in a workshop taught by a well-known marketing guru who guaranteed in a brochure that after a few sessions with him “you’ll be even able to sell ice to Eskimos, sand to Bedouins, and condoms to eunuchs.” I suppose that if an updated brochure were issued in late 2005, in the fifth year of the presidency of George W. Bush and at a time when according to the Pew Research Center “anti-Americanism is deeper and broader now than at any time in modern history,” the celebrated PR whiz-kid would add to his marketing mission-impossible list the selling of a very unappealing product—the Bush administration’s foreign policy, AKA Democratic Empire—to an unreceptive global target audience that includes Eskimos (“Let’s make the North Pole safe for democracy”), Bedouins (“From the guys who brought you Lawrence of Arabia: won’t you buy a used camel from Bush?”), and perhaps even a few eunuchs.
Enter Karen Hughes, our new global PR czarina, undersecretary of state for public diplomacy. After reading the press coverage of her tragicomic odyssey among the believers in Egypt, Saudi Arabia, Turkey, Indonesia, and Malaysia—perhaps best described as “My Travels with Texas Karen the Infidel in the Lands of Ishmael”—one can assume that the only way the geniuses at Foggy Bottom could have turned that trip into more of a disaster for the American brand name would have been to choose Ray Stevens’s 1962 hit, “Ahab the Arab” as Madame Ambassador Hughes’s theme song for her Mideast excursion, which was billed as a “listening tour.” “Let me tell you about Ahab the Arab, the sheik of the burning sand. … He wore a big ol’ turban wrapped around his head. … he’d jump on his camel named Clyde, and ride”
Even without Ahab the Arab and Clyde the Camel to accompany her, the voyages of America’s top public diplomat to the Middle East and Southeast Asia turned into major media fiascos that will probably be taught one day in how-not-to-sell-your-product marketing classes or at least recalled as another of those what-were-they-thinking Washington mysteries.

(read the rest here http://www.amconmag.com/2005/2005_12_19/article2.html and subscribe to The American Conservative which is the most original and throught provoking magazine around).

I've received great feedback to the article, including from two individuals who work in the State Department and another one who was involved indirectly in coordinating Hughe's Middle East incusion.

Gothamimage said…
If you say the word, "TomFriedmanColumn," thirteen times, you may wind up in wormhole of existential oblivion, that even Dante could not describe without resorting to the latest advances in string theory.

In order to understand the PR style of Hughes and the rest (your column was excellent) - look at a box of those ubiqutous Whitman Sampler chocolates that you see in all the stores during the season.

On the box, they paint on a fake needlepoint design, so as to evoke a feeling of 'ye ole, that stands in counter-distinction to what you imagine is the indutrial reality used to manufacture the medicore tasting candy.

The fake needlepoint, may evoke just enough of a sense of hearth and ye'ole, that is causes people, otherwise more discerning, to buy the cheaply priced candies as last minute holiday gifts. The thinking is "it can't hurt too much..."

We have a Presidency and a foreign policy that can be reduced to the metaphor of a fake candy, served up and consumed for the holdays.

Tell Tom Friedman to put that in his stovepipe and smoke it up Foggy Bottom.
7:07 PM

Gothamimage said…
Now that you mentioned you got great feedback from people within the exec. branch, look for the wing sites to call for an investigation into the seditious leak -Leongate - Since Bush thinks he can bypass judicial review, he may...LOL
7:38 PM