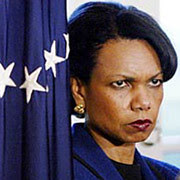 Sebastian Mallaby
teaches us how to do that:

In January 2000, as the Bush campaign got underway, Rice published a manifesto in Foreign Affairs that laid out the classic "realist" position: American diplomacy should "focus on power relationships and great-power politics" rather than on other countries' internal affairs. "Some worry that this view of the world ignores the role of values, particularly human rights and the promotion of democracy," she acknowledged. But the priority for U.S. foreign policy was to deal with powerful governments, whose "fits of anger or acts of beneficence affect hundreds of millions of people."

Even six years ago, this was an outdated position. The Clinton administration was certainly preoccupied with powers such as Russia and China, but it was also tracking Islamic terrorists who had already attacked the World Trade Center. The importance of other non-state actors, from rebels to environmentalists to bond traders, had become a cliche of globalization commentary; AIDS had been recognized as a security threat. The era of great-power politics was widely thought to have ended with the collapse of the Soviet Union. Rice seemed like a Sovietologist who hadn't quite caught up.

Even more curiously, Rice was leaning against the tide in her own party. Ever since the 1970s, the heyday of the ultra-realist Henry Kissinger, his followers had been retreating. The realists favored accommodation with pro-American autocrats, but then Iran's shah fell, followed by dictators in the Philippines and South Korea -- and the realists found themselves on the wrong side of history. Likewise, the realists favored detente with the Soviets, but Reagan's denunciations of the evil empire proved more effective. Time and again, the idea that diplomacy consisted mainly of relations with powerful governments proved wrong. As a rising cadre of neoconservative Republicans argued, diplomacy was often about judging the currents within countries -- and backing democratic ones.

Fast-forward to 2006. Rice gave two speeches last week calling for "transformational diplomacy," meaning diplomacy that will transform undemocratic societies: The internal affairs of other countries turn out to be important after all. "The greatest threats now emerge more within states than between them," she said Wednesday. "The fundamental character of regimes now matters more than the international distribution of power. In this world it is impossible to draw neat, clear lines between our security interests, our development efforts and our democratic ideals."

Well, that's quite a turnaround. But it's not a completely satisfying one, because the debate has recently moved on. Rice has caught up with the 1990s consensus that powerful states may pose less of a problem than disintegrating weak ones and that the best hope for peace in the long term is a world of stable democracies. But she's only half-acknowledging the next question: Yes, weak and autocratic states are a problem, but can we do anything about them?

The best formulation of this new debate comes from Francis Fukuyama, who famously proclaimed the universality of the democratic urge in his 1989 essay on history's end. Fukuyama certainly believes in spreading U.S. values, but he has emerged as a critic of the Iraq war because he believes its ambitions were unrealizable. The United States lacks the instruments to transform other societies, Fukuyama argues; to build nations you must first build institutions, and nobody knows how to do that. Conservatives, who have long preached the limits to what government can achieve with domestic social policies, should wake up to government's limits in foreign policy as well.

Rice shows some signs of seeing this. She is not content with the instruments of foreign policy as they exist, and her speeches last week were about fostering new ones -- a strengthened office for post-conflict stabilization and a reconfigured foreign aid program. But this only begins to confront Fukuyama's worry, which is that no amount of tinkering with the apparatus of government will make nation-building possible. Creating a functional Iraq or Afghanistan requires creating norms of work and trust and honesty, and such norms can't be conjured by outsiders, no matter how well organized they are.

The big question today in foreign policy is not whether you are a realist or an idealist. It's whether you are an optimist or a pessimist: whether you think that Iraq has gone badly merely because the Bush administration mishandled it, or whether you believe that no amount of skillful management could have achieved stability after three years. I've watched Rice handle squadrons of aggressive journalists, and there's no doubting her intellect. But her forays into grand theory are disappointing. Last week's call for "transformational diplomacy" merely slides past today's big question. It doesn't offer an answer.