Sailer on Fukuyama; More on the Turkish Cinema

Steve Sailer, who is one of the most original conservative thinkers and is also a film critic (I love his reviews) and a contributor (together with your humble servant)to the American Conservative, has a interesting post on "something nonboring about Francis Fukuyama" on his blog:

I'm not saying that Fukuyama is always wrong. What I am saying is that Fukuyama's first idea about anything is always wrong, but, unlike his pals, he often comes up with a better answer 5 or 10 or 15 years later. Granted, that isn't a particularly scintillating track record, but compared to the true believer neocons who never learn from anything, he's Edmund Burke predicting the whole course of the French Revolution in 1790.

Sailer is also intrigued by the fact that Fukuyama is the "only minority intellectual in America who does not write heavily about race" and even "goes out of his way to ignore race even when it's obviously relevant." Hence in his book 'The Great Disruption' that is primarily about crime and illegitimacy,"he dismisses race's relevance to these subjects in a single page!" However,

being a minority is still valuable to Fukuyama in his spat with his former neocon pals. In 2005, when Charles Krauthammer tried to play the Anti-Semite Card on him for daring to criticize the neocons, he didn't collapse like most white conservatives intellectuals would because, hey, he's not white! So, he enjoys privileges.

And read the rest of Sailer's post where he describes the way Krauthammer has used the the "anti-Semitic card" against Fukuyama, Fukuyama's response and Sailer's thoughts about all of this.
My thoughts on the neocon "anti-Semitic" card. Some of the neocons have insisted that their Middle East policy agenda responds to U.S. national interests and is not "Israel-centric," and that Israel just happens to be America's most reliable ally in the region. It's something along the lines of: What's good for America, is good for Israel, and vice versa. The problem with this argument is that it's not true (even U.S. and British interests diverge), and ironically, as I've pointed out, you can turn the neocon Iraq thesis on its head and suggest, as I've done here that the U.S. invasion of Iraq and the entire neocon "Democracy Project" in the Middle East runs contrary to Israeli national interests... Here is my Public Choice thesis about the (Jewish) neocons and Israel: Their interests as policy makers, lobbyists, analsysts, etc. lie in their ability to function as kind of middle-men between Washington and Jerusalem and their sense of identity derives from the notion that there is no "dual loyalty" when it comes to the United States and Israel. That is, a proud and assertive American-Jew is by definition someone who is in support for a strong Israel and for a strong U.S. involvement in the region. If you challenge that thesis, you challenge their power. So... watch out.
Now my brief thoughts about the End of History: Fukuyama and many of his colleagues failed to take into consideration that sources of identity -- nationalism, religion, ethnicity, race, tribalism -- would become even more relevant in the aftermath of the end of the Cold War and ingnite more conflicts. 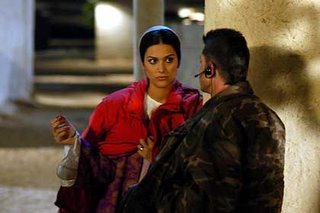 And for anyone interested in the controversy about that Turkish cinematic masterpiece, Valley of the Wolve, Diana Moon emailed me this article from Der Spiegel (in English) on the way the movie was received by the German-Turkish community. The author, a German-Turkish politician Cem Özdemir who is a Green Party member of the European Parliament, writes that:

Turkish youth would be better served to watch "Desperate Hours", a film about the life of Selahattin Ülkümen. As a Turkish diplomat in Rhodos, he saved the lives of many Jews during the Nazi era, as did the then-ambassador in Marseille, Necdet Kent. To many, they are known as the Turkish Schindlers. Turkey was the first country with a Muslim majority that was recognized by Israel and the Ottomans gladly accepted Jewish refugees from Spain during the Inquisition. The Turkish government should have distanced itself from this film to demonstrate its opposition to anti-Semitism and anti-Americanism.
Many of the reviews I'm aware of have ignored the anti-Semitic undertones and sketchy plot to focus on a lively audience that cheers, screams and applauds -- and would probably like to sprint home during the showing to grab a gun and come to the aid of the main character. But it hasn't gone that far -- yet. During a recent showing in the southern German town of Kehl, not everyone stayed until the credits. A Turkish guest even asked out loud whether the film wasn't "laying it on a bit thick." Nobody yelled "Allah is great" and no one joined in with the Turkish national anthem. There wasn't even any applause at the end.
Still, the film has apparently created such a mass hysteria in the Turkish community that everyone feels they have to see it to keep up. A ban would be useless since there are so many alternatives to gain access to the film these days. Plus a ban would just add to the underdog mystique and confirm the double standards of the West for those who believe in them.

The author also writes that "the criticism I levelled at Danish newspaper Jyllands-Posten -- that it consciously published the Muhammad caricatures to provoke and divide -- is the same criticism I have for the people who made 'Valley of the Wolves.'" Sorry, but I don't buy that. I don't recall Western readers expressing great interest in the cartoons before the violent riots. And no one has been attacking Turkish diplomatic missions in this country.
Also the New York Times reports today that:

A Turkish children's welfare organization brought suit yesterday to halt screenings of a hugely popular Turkish film that depicts American troops in Iraq as villains. Based in part on actual events, the film, "Valley of the Wolves — Iraq," begins with a headline-making incident in 2003, when American marines took a group of Turkish special forces soldiers into custody. In seeking to end screenings of the film, which has drawn more than three million viewers, according to its distributor, since it opened on Feb. 5, Nil Demirkazik, the leader of Cocuk-Der, a nongovernmental organization said, "The movie commits the crime of separatism by trying to instill in the masses xenophobia, racism and the sick idea that the entire world is against Turkey."