On Men and Neocons 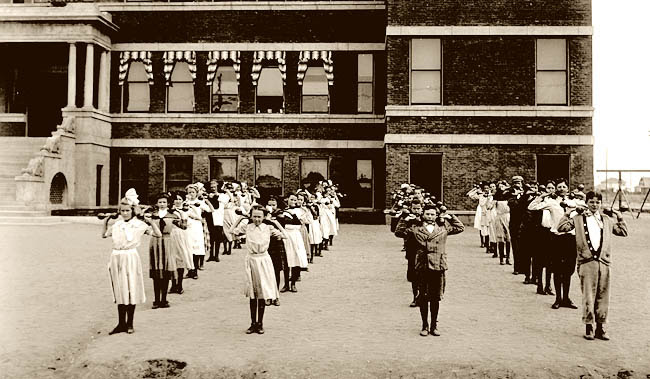 A neocon in high-school

A friend emailed me an invitation to this:

You are cordially invited to a book forum co-hosted by
Hudson Institute and The Independent Women’s Forum for
MANLINESS
(Yale University Press, 2006)
HARVEY C. MANSFIELD JR.
William R. Kenan Jr. Professor of Government, Harvard University
Wednesday, March 15, 2006
3:45 P.M.
Registration
4:00 P.M. Remarks by Author
5:00 P.M. Reception
Why do men need to feel important? It’s their manliness. But is manliness obsolete? Is it even a virtue?
This book invites—no, demands—a response from its readers. This is the first comprehensive study of manliness, a quality both bad and good, mostly male, often intolerant, irrational, and ambitious. Our “gender-neutral society” does not like it but cannot get rid of it.
Drawing from science, literature, and philosophy, Mansfield examines the layers of manliness, from vulgar aggression, to assertive manliness, to manliness as virtue, and to philosophical manliness. He shows that manliness seeks and welcomes drama, prefers times of war, conflict, and risk, and brings change or restores order at crucial moments. Manly men in their assertiveness raise issues, bring them to the fore, and make them public and political—as for example, the manliness of the women’s movement.
After a wide-ranging tour from stereotypes to Hemingway and Achilles, to Nietzsche, to feminism, and to Plato, the author returns to today’s problem of “unemployed manliness.” Formulating a reasoned defense of a quality hardly obedient to reason, he urges men, and especially women, to understand and accept manliness, and to give it honest and honorable employment.
HARVEY C. MANSFIELD JR. is William R. Kenan Jr. Professor of Government at Harvard University. He is the author of five books, including Statesmanship and Party Government, Taming the Prince, and America’s Constitutional Soul; editor of two; and translator or co-translator of four, including Niccolò Machiavelli’s The Prince and Alexis de Tocqueville’s Democracy in America.

My friend also emailed this entertaining comment by James Wolcott on Mansfield and Manliness.
Well... after teaching for a few years in American academia (in social science departments), surrounded by effeminate neo-Marxist men and castrating feminists I can empathize to some extent with Mansfield. There is certainly no way that a non-tenured professor would survive in a social science department at any major university after publishing this kind of book. What I do find amazing that the topic -- the Manly Man -- seems to resonate with the "Neoconservative Man"- in itself an oxymoron. I would not use the term "effeminate" which could be considered a compliment if you include, say, (the early) Leonardo de Caprio in that category, to describe, say, John Podhoretz. Arnold's "Girlie Men" would be a more appropriate way to describe a group of men who are in a habit of sending other men (and women) to fight and get killed in wars, while the only war they would be willing to fight is the "war of ideas" on the op-ed pages and in think tanks.
For more on the subject see Dr. Strauss' take.

Dr Leo Strauss said…
What will be interesting is how Mansfield and even VDH square away their fear of manliness under siege (sounds like a bad Steven Segal movie) with the eclipse of the warrior under OSD's vision of netcentric operations.

Who knows? The most fearsome warriors of the new age may be pudgy nerds, surrounded by empty Mountain Dew bottles, Reeses wrappers, teabagging others and calling everyone a 'n00b', 'mo' or 'fag' on Xbox live.

Leon Hadar said…
Well, we can call the guys from NED and have a color revolution...
8:19 PM

Hoots said…
You may be aware of an essay by Terrence O. Moore from a couple years back putting a fine point on manliness by contrasting its popular image with that of the thumotic male. Truly delightful read. Love that word: thumotic. I had no idea the taxonomy of maleness could be so elaborate.
5:41 PM