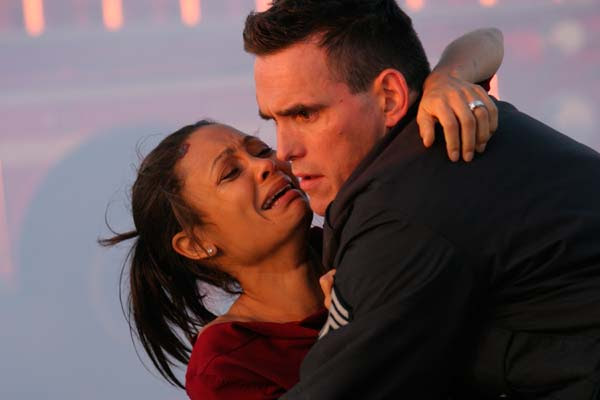 Best Picture
Should Win: Crash.
Will Win: Crash. WON!
(It's a movie that I didn't expect: original and provocative treament of race-relations; great acting and directing).

Best Actor
Should Win: Joaquin Phoenix (Walk the Line).
Will Win: Philip Seymour Hoffman (Capote). WON
(I must admit that the subject didn't interest me and I'm not a fan of the music, but I thought that Phoenix did an excellent job).

Best Actress
Should Win: Judi Dench (Mrs. Henderson Presents).
Will Win: Felicity Huffman (Transamerica).
(Judi Dench is one of the best living movie actresses, and I just think that the lady deserves it; although Reese Whiterspoon WON in Walk the Line is also fantastic; and I really hated Transamerica. I mean, just compare it to Mrs. Henderson. What's happening to Western civilization?)

Best Supporting Actress
Should win: Rachel Weisz (The Constant Gardener). WON!
Will win: Cathetine Keener (Capote).
(I loved the book and the movie which was an intelligent and beautiful treament of the novel. Weisz is an intelligenet and very, very beautiful actress; Keener is overated). Best Director
Should win: Steven Spielberg (Munich).
Will win: Ang Lee (Brokeback Mountain). WON
(Eat You heart out, Hitchcock. Some of the scenes in this movie will be taught in film schools for years to come. What can I say? Spielberg is my guy. I found Brokeback too long and boring).

vbspurs said…
I was perusing Technorati for some similar prediction update threads, when I pounced on yours.

A few comments on your opinions:

(It's a movie that I didn't expect: original and provocative treament of race-relations; great acting and directing).

Crash was, indeed, worthy of a Best Picture statuette, but Brokeback did have its cinematographic moments, as you state below in the Ang Lee commentary.

The problem is that the characters were at times too splayed out, with trite storylines, or worse, situations which were never truly explored, because of time constraints.

Phoenix was very good as Johnny Cash, and perhaps moreso than Jamie Foxx was, since he actually sang the songs (a difficult feat to capture for such truly unique phrasing, which Cash had).

But in terms of pure acting, Hoffman rightly deserved it. A tour-de-force performance in an otherwise oddly unengaging film.

As for Best Actress, I am a colossal Judi Dench fan, having seen her in person on the stage twice (her acting in "Amy's View" was electrifying), but she had a madcap romp in Mrs. Henderson Presents, compared to the film she should have won in, Mrs. Brown.

Mind you, she has her Oscar already, so no worries.

Reese Witherspoon, with her moxie and old-fashioned Hollywood glamour, has enormous range for someone so young.

And I love to credit reward whenever possible.

All I can say for the deadly uneven Syriana, is that Clooney was excellent in it, quite saving it, with the exception of the charismatic would-be Sheik, who I've been told, starred in a Star Trek series recently.

Dillon deserved it, I agree, although if we would be doing a Dench this year (awarding an actor for the greatness of recent films, which went cruelly unrewarded), it was Giamatti's turn.

All in all, I too have no quarrels with the Oscar awardees this year.

I'll keep your blog in mind, as it looks quite interesting. :)

Thanks for your comments. Jesse Walker on Reason.com did a great deconstruction of all the "gay thing" in Brokeback, and the point is that I asked myself when I came out of the movie: Would I care for this film if it was about a relationship between a married cow-boy and married cow-girl. I don't think so. Yes, the scenes were great, but for that we have National Geography documentaries... Walk the Line: As I mentioned, I'm no a great fan of Jhonny Cash and his music and the fact that I enjoyed the movie so much is a credit to Phoenix and Reese W. Btw, I'm probably going to devote a post of Transamerica which was just horrible. Leon
10:04 PM