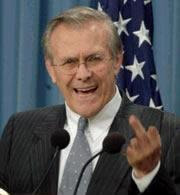 And I mean it. I'm sick and tired reading about "More retired Generals call for Rumsfeld's Resignation". First, where were these guys when the decision to go to war were made? Why didn't they resign, protest, etc. if they thought that the strategy pursued by Rumsfeld would fail and endanger their troops? These are not Profiles in Courage in any way you look at it. Moreover, as military commanders they were responsible for everything that has taken place in Iraq -- the successes and the screw-ups. Then there is the issue of civilian control over the military. I cannot stand Rumsfeld and am opposed to his policies. But this guy is in charge, selected by the president and confirmed by Congress and I really don't care what the men and women in uniform -- or those who retired from service -- think about this war. If they want to change policies, they should run for office. And finally I can already see what would happen if Rumsfeld is fired. The neocon spin would be that he was the guy responsible for the mess in Iraq. You know the line: The script we wrote was great; it's the producer (Rumsfeld) who couldn't deliver. Now that we have a new Pentagon chief (Condi? Lieberman?) things are going to be fine. So I hope that Rummy will stay in the bunker until the bitter end.

Also in case you've missed my latest piece on the Mearsheimer/Walt, etc., please read From the China Lobby to the Israel Lobby
Rent-seeking in US foreign policy. Also check out the Liberty & Power Blog where libertarian thinkers have been discussing the topic.

Anonymous said…
Why I support Donald Rumsfeld as Secretary of Defense

First, Secretary Rumsfeld is and is known by many national security intellectuals and senior military officials to be the brightest and most capable man ever to serve as Secretary of Defense. He truly is a remarkable man and a beautiful mind. Any so-called mistakes Rumsfeld has made would likely have been made by another Secretary of Defense with regard to the aftermath of the Iraq war.

Second, the debate as to whether there were enough troops forged by the two military thought camps (the Shinseki-Franks groups), the arguments are often misconstrued. Rumsfeld and the new defense intellectuals arguing for new and bold execution, that is, a more network-centric and information-age execution of Operation Iraqi Freedom in March 2003, proved to be right in their assessment of the “number of troops” needed to defeat Saddam’s regime. This campaign was done with astonishing speed, agility, and complexity and historically speaking is one of the greatest victories in military history. It will prove to be a defining moment of warfare in the 21st century by all standards.

However, the second half of the war, that is, the rebuilding and reconstruction of the country proved to not be sufficiently nor correctly planned and prepared for. This second half could have benefited from either more troops (U.S. or coalition) or another force type the Pentagon (or other agency) has not invested sufficiently in (troops designed, trained and equipped to rapidly help stabilize and rebuild a country). This second half did not have sufficient numbers or capability because of some assumptions based on intelligence which proved to be incorrect, and the robust insurgency which emerged (arguably somewhat the result of decisions made to disband the Iraqi Army). This decision as well as the many other decisions may have allowed the insurgency to take hold easier than it otherwise would have. And these decisions rest squarely with officials in charge of the war, including Rumsfeld. However, the decision to not disband the Iraqi Army also would have had its consequences, and persons making these decisions had to look at differing views of intelligence to make their decision. Hindsight is 20/20. Rumsfeld should be graded on his prosecution of Operation Enduring Freedom in Afghanistan, and Operation Iraqi Freedom (which includes the brilliantly successful initial campaign to topple Saddam, the aftermath of reconstruction, and the third “war” of fighting terrorists and a robust insurgency). In all accounts he has done wonders with one of the most different and complex Global wars ever to be waged.

Finally, as to running the Department and transforming the military to tackle new challenges and take advantage of new opportunities – he should be commended. While there is not yet a large camp among the general public who understand what is happening among the Department of Defense and national security apparatus at large, the changes that are taking place as a result of Rumsfeld vision and leadership will radically transform the way the Department of Defense plans and conducts war in the future. Without these bold and innovative changes the new challenges in transitioning from the industrial-age to the information-age would not be matched. The 21st century security environment is different and is changing at a rapid pace. Rumsfeld understands this and the new opportunities which must be harnessed to deal with these complex and adaptive challenges. He understands we will be fighting rapidly adaptive networks taking advantaged of globalization and the internet to do their harm. He understands the current organization and makeup of the Department of Defense and national security apparatus at large is insufficient to face these new and adaptive challenges.

There are still some defense intellectuals and Generals out there who do not yet understand these challenges and are resistant to change, but there days are numbered. Many of these Generals who demand Rumsfeld should resign are old-fashioned and still caught up in the industrial-age Cold War mentality. They do not understand the information-age and the new ways of operating. We should respect their opinions but also listen to the new breed of warriors being generated today who understand this well and are emboldened by Rumsfeld’s grand vision for change which will help secure generations to come. I highly support Donald Rumsfeld as Secretary of Defense. I welcome your thoughts and commentary.
1:13 PM

Anonymous said…
If Bush had as good a sense of humor as some sympathetic reporters credit him with - he would fire Rumsfeld, but then nominate Wolfowitz to replace him as SecDef and then put Bolton in as Wolfowitz'z deputy - in the spot that Wolfowitz held. Then he should nominate Rumsfeld to by UN ambassador.

I would not agree or approve of any of this - but it would be pretty funny.
3:33 PM