Perhaps it's too late for Bush to become a non-cowboy 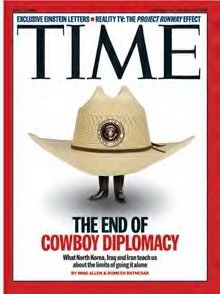 Time magazine's cover story The end of cowboy diplomacy has been mentioned, talked about, recycled, etc. in the print and broadcast media in recent days. You can guess what the article says even without reading it... Here are the last paragrphs.

But in the span of four years, the administration has been forced to rethink the doctrine by which it hoped to remake the world. Bush's response to the North Korean missile test was revealing: Under the old Bush Doctrine, defiance by a dictator like Kim Jong Il would have merited threats of punitive U.S. action. Instead, the administration has mainly been talking up multilateralism and downplaying Pyongyang's provocation.

The Bush Doctrine foundered in the principal place the U.S. tried to apply it. Though no one in the White House openly questions Bush's decision to go to war in Iraq, some aides now acknowledge that it has come at a steep cost in military resources, public support and credibility abroad.

The administration is paying the bill every day as it tries to cope with other crises. Pursuing the forward-leaning foreign policy envisioned in the Bush Doctrine is nearly impossible at a time when the U.S. is trying to figure out how to extricate itself from Iraq.

Taking note and taking advantage
Around the world, both the U.S.'s friends and its adversaries are taking note -- and in many cases, taking advantage -- of the strains on the superpower. The past three years have seen a steady erosion in Washington's ability to bend the world to its will.

The strategic makeover is most evident in the ascendance of Secretary of State Condoleezza Rice, who has tried to repair the administration's relations with allies and has persuaded Bush to join multilateral negotiations aimed at defusing the standoffs with North Korea and Iran.

By training and temperament, Rice is a foreign-policy realist, less inclined to the moralizing approach of the neoconservatives who dominated Bush's cabinet in the first term. Her push for pragmatism has rubbed off on hawks like Vice President Dick Cheney, the primary intellectual force behind Bush's post-9/11 policies.

"There's a move, even by Cheney, toward the Kissingerian approach of focusing entirely on vital interests," says a presidential adviser. "It's a more focused foreign policy that is driven by realism and less by ideology."

To much of the world, that's a relief.

You get the dialectics here: First, there was The Thesis: Traditional U.S. Foreign Policy since 1945: Mix of internationalism and realism..
Then came The Anti-Thesis: The post-911 Bush Doctrine: A mix of unilateralism and messianism.
Now comes The Synthesis: The Condi Doctrine.

Well, it all sounds very neat and makes for a great spin. But it seems to me that if we are using this cowboy metaphor it's important to remember that in the classic narrative of the Western the Cowboy either wins over the Bad Guys or he loses. I don't recall a Western in which the cowboy rides into town, kills a few guys in the Saloon, gets into fights with many others, and then when things don't work as he expected them to, well, he then pleads with everyone that, hey, we all need to get along and stuff (diplomacy). It's too late for that. He pissed off too many people, and now that they smell his weakness, they'll certainly go after him. The point is as I suggsted in an earlier commentary, Bush has already unleashed certain forces, especially in the Middle East, which he cannot control anymore

Putting all of these historic developments into context, one can conclude that the post-9/11 U.S. policies were nothing short of a revolutionary attempt to weaken the very fragile foundations of the political status quo in the Middle East – without coming up with a viable and sustainable strategy aimed at replacing them in a way that would help protect long-term American and Western interests: the U.S. destroyed Iraq's military power, the only counterbalance to that of Iran, without making an effort to co-opt Iran into the system.

It got rid of an Arab-Sunni dictator who had kept the lid on the ethnic and religious powder keg of Iraq and helped create the conditions for a bloody civil war there without deploying the necessary military troops to deal with such an outcome.

In the process, the U.S. strengthened the power of the Shi'ites in the Middle East who threaten the Arab-Sunni regimes there, and empowered Kurdish nationalism, which has alarmed Turkey and Iran.

Add to all of that the growing anti-Western emotions among Muslims worldwide, as demonstrated in the recent "cartoons war," Iran's drive to achieve nuclear military capability, and the continuing domestic challenges faced by the pro-American regimes in Saudi Arabia, Egypt, and Pakistan, and it becomes quite obvious that no one can now press the rewind button and restore the status quo ante.

If anything, the powerful forces that have been unleashed by the U.S. cannot be stopped and could intertwine with other global developments, including Sino-American competition over energy and rising economic nationalism in the West.

Not unlike the aftermath of WWI, which brought about the collapse of great empires, including that of the Ottomans in the Middle East, the dramatic changes we are witnessing now will probably help produce much instability in the coming years.

Indeed, as I pointed out in A Perfect Geopolitical Storm Taking Shape the ingredients of Iraq, Iran, Israel-Palestine and the Moslem-Western tensions are producing the vicious circle into which we are being drawn now. George W. fantasized that he was playing Gary Cooper in High Noon.
Now we are all stuck because of him in a non-funny version of Blazing Saddles.