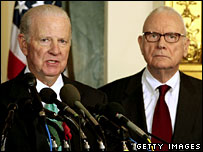 "Suddenly the roaring, the shaking, and the shocks just stopped. The whole Aegean region went silent."

"Then, slowly, and with hardly a whisper of sound... out of the huge cleft in the mountain peak there slowly emerged... a tiny little mouse."

Anonymous said…
And the mouse said, "Feed your head, feed your head." Oh wait. That was a dormouse.

This mouse says "Our Yellow Light saps your Will, making you yearn for Defeat and watching re-runs of Friends on cable."
10:18 AM

Dennis Dale said…
This one's not for the children:

There's an old joke about an amorous mouse who sneaks up on and mounts an elephant. A coconut (work with me here) falls hard on the elephants head. The elephant lets out a wail. The mouse proudly says: "suffer bitch."