The Surge Scam: Getting Rid of the Goat 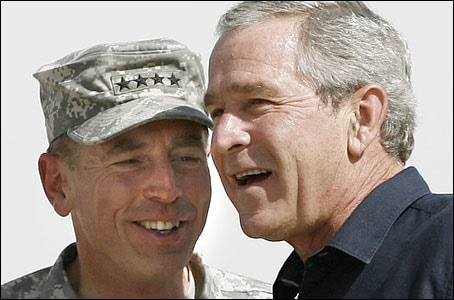 From Right Web
The Surge Scam: Getting Rid of the Goat
Commentary by Leon Hadar | September 12, 2007


There is an old Jewish story about a man who lives in a very small house with his wife, many children, no space, and very little money. So the man goes to his rabbi for advice: "Rabbi, you are so wise, and here I am living in a small house, with no light and little space. And I am so poor. What can I do?" The rabbi listens and instructs the man: "Go to the market, buy a goat, and put the goat inside the house with you for a week and then come back to me." The man is shocked: "But, rabbi, as I told you, I have very little space and money. If I buy a goat, I won't have any space and I'll lose all my money." But the rabbi insists: "Get that goat!" So the man buys the goat. He takes it home with him. The goat eats the furniture. It's too big and takes up all the space in the small home. The man's life is miserable. After a week, he goes to the rabbi and cries: "Rabbi, I put a goat inside my house. There is really no space anymore. Please help!" The rabbi responds: "Go to the market, sell your goat, and come back to me in one week." The man sells the goat and returns after a week to the rabbi. "Rabbi, this week my life was great! With no goat in the house, it's really huge now and my family and I have so much space to live in. And after selling the goat, I actually have more money. You are a very wise man, rabbi!"

Recall that when President George W. Bush announced the "surge" in the aftermath of the November 2006 midterm elections and against the backdrop of the continuing mess in Iraq, most lawmakers and pundits in Washington, not unlike the man in our story, were shocked. After all, the clear political message from the elections, in which Republicans lost their majority in both the Senate and the House, was that the American people wanted steps to withdraw U.S. troops from Iraq. Moreover, the conclusion of the Iraq Study Group, chaired by former Secretary of State James Baker and former Democratic Rep. Lee Hamilton, which reflected the general consensus among the members of the foreign policy establishment, was that the United States should start to disengage from Iraq and work together with other regional players, including Iran and Syria, to bring stability to Iraq.

Indeed, the conventional wisdom in Washington at that time was that for all practical purposes, the United States lost the war in Iraq. The neoconservative project was over. The foreign policy realists would now be in charge, and their advice to Bush would be to declare victory and bring an end to America's costly military intervention in the Middle East. The expectation on Capitol Hill, in the media, and at the think tanks was that the White House would probably start withdrawing a few thousand troops from Iraq and transfer the remaining forces to strategic locations on Iraq's borders and employ them mostly for training the Iraqi forces, and that on the diplomatic front, the Bush administration would move ahead to "engage" Tehran and Damascus while putting new emphasis on reviving the peace process in the Holy Land.

But instead, Bush, like the rabbi in our story, told his people that he was going to make a messy situation messier. He rejected the recommendations of the Iraq Study Group and instead followed roughly the recommendations of a report prepared by leading neoconservative strategist Fredrick Kagan from the American Enterprise Institute (AEI) to deploy tens of thousands more troops to Iraq. With the exception of low-level diplomatic talks with Iranian diplomats in Iraq and a brief exchange between Secretary of State Condoleezza Rice and her Syrian counterpart, no serious efforts were made to engage the Iranians and the Syrians. If anything, the rhetoric coming out of Washington suggested that the Bush administration still regarded these two governments as major threats to U.S. interests in Iraq, with reports raising the possibility of U.S. attack on Iranian nuclear installations. At the same time, growing military tensions between Israel and Syria ignited fears of an armed conflict between the two counties, which could bring about the intervention of the Lebanese Hezbollah guerrillas and perhaps even lead to a confrontation between Iran and the United States. Hence much of what Bush has been doing since November 2006, like the rabbi's advice to add a goat to the crowded house—seemed to be counterintuitive: Add more troops in Iraq. (see the rest.)

Anonymous said…
Excellent as usual Leon - But you got that Goat and Rabbi story wrong - Go to Stop The Spirit of Zossen and look for the recent comment by Armchair for the correct version
6:25 PM