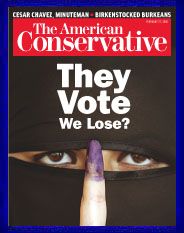 Read my article Democracy and its Discontents in the new issue of the American Conservative. Here are a few paragrpahs:

Democracy & Its Discontents
Voting doesn’t produce peace—much less desirable outcomes—in societies that lack the foundations of a liberal order.
by Leon Hadar
As the Nazis were about to capture power in the aftermath of the last democratic parliamentary elections in Germany in March 1933, there was no indication that the German Communist Party was mounting any concerted response, reflecting the belief among its leaders that the new Nazi-dominated government was the “dying gasp of moribund capitalism” and that Hitler’s government would create the conditions for a “revolutionary upturn” and accelerate the momentum toward a proletarian revolution. The expectation that the Nazis would help ignite a Communist revolution made sense at that time, if one was a Marxist believing in a doctrine that assumed that realities were predetermined by political and economic forces—that sooner or later the Good Guys were bound to defeat the reactionary capitalists and their agent, Hitler. Progress was on the march. The rest was just details.
Just details like the electoral victory of the radical Shi’ites in Iraq, or the win by Hamas in the Palestinian elections, or the strengthening of the Muslim Brotherhood in Egypt. Freedom is on the march in the Middle East according to the proponents of the grand ideological doctrine known as Democratic Peace Theory (DPT), which has been the driving force behind the U.S. war in Iraq and the push for democracy in the broader Middle East. And around the globe: just choose the color of your revolution. Suck up to those in Washington in charge of distributing funds for democracy promotion and choreograph a colorful media event displaying a lot of cool stuff. If that doesn’t work, dispatch a sleazy Chalabi-like operator to Washington and hire some lobbyists, and before you know it the Marines will “liberate” your country. You then become part of the larger story of a war of liberation à la Iraq, where a brutal dictator was unseated so that democracy could be installed as a model for the entire Middle East. Forget that the Iraqis didn’t greet their liberators with flowers. Forget those missing weapons of mass destruction and the more than 2,000 fallen Americans and who knows how many dead Iraqis. Just fix your eyes on the Democratic Peace Prize.
Indeed, Communism may be dead, but in Washington devotion to a grand ideological doctrine remains as powerful as ever. If you listened only to George W. Bush’s many let’s-make-the-world safe-for-democracy sermons you would have to conclude that a historic “revolutionary upturn” has taken place in Iraq that will be accelerating the tempo toward a democratic revolution in the Arab world. For Bush, who apparently keeps Nathan Sharansky’s The Case for Democracy: The Power of Freedom to Overcome Tyranny and Terror next to his bed, democracy is the cure for most of humanity’s ills, ranging from political violence and economic underdevelopment to male baldness. Even in its more modest version, the global democratic crusade adopts what the neocons consider to be an axiom of international relations—that democracies rarely, if ever, wage war against one another. Translating that maxim into policy means that Washington has the obligation, based not only on moral considerations but also on pure self-interest, to promote democracy worldwide as the most effective way to establish international peace and stability. In his second inaugural address, Bush proclaimed, “the survival of liberty in our land increasingly depends on the success of liberty in other lands. The best hope for peace in our world is the expansion of freedom in all the world.” Democracy would not only respond to the legitimate demands of those living under authoritarian systems but also reduce the chances for domestic instability and international wars and retard the spread of terrorism. Not surprisingly, a huge complex of government agencies have become instruments for democracy promotion, with Republicans and Democrats alike subscribing to the catchy slogan “Make Democracy, Not War.”

Let me know what you think.