more on Frank and Hitch... 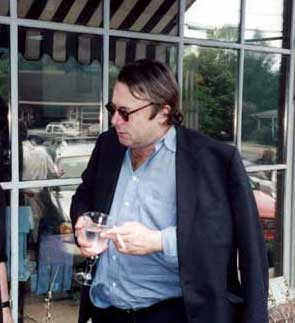 On Stop The Spirit Of Zossen there is a entertaining post on the two leading characters in the drama that has caught our imagination, starring that unforegettable love triangle, Bill Kristol ("The Party's Over"), Francis Fukuyama ("The Man who Got Away") and Christopher Hitchens ("Just in Time"). You'll cry and you'll laugh as the three pundits interface in power lunches, green rooms (which aren't as dangerous as that Green Zone in Baghdad), AEI, CFR, and NED. The most Hegelian moment: When Frank confronts Kristol Jr.: "I won't invade Iran, you BilLenin)" and Hitch explodes: "You're an Islamofascist, Frank!"
Dr. Strauss on Frank:

Fukuyama seeks to be the Bukharin of the Neocons — the moderate one, believing that time will make inevitable the process of unfolding Freedom via materliasm. Modernity is what everyone wants, and democracy is its offshoot. He claims his moderation is different from the militarist revolutionary stance of the 'Leninists' Kristol, Kaplan et al. Fukuyama's proposed solution? Blend Wilsonian idealism with pragmatism.

Hitchens' attempt to embrace Conquest is inapt for all sorts of reasons. Essentially, Hitchens the flea seeks to lie down with Conquest and pick up a dog. As a Trotskyite and romantic Leftist, Hitchens opposed the stand of the liberal democratic West against Soviet subversion, faux Marxist Leninist movements such as the Sandanistas (Tomas Borge trained by the KGB, etc.), etc. Robert Conquests' life work was devoted to exposing the lies, horror, destruction and murder in the name of abstract ideological utopianism. In short, Hitch's career up until the Bush Administration.
Make no mistake. Hitch's claim that Conquest was opposed to Stalinism (but not Trotskyism) is the same old tired canard that Issaac Deutscher down to Stephen Cohen tried to do — rehabilitate the Soviet Left Experiment by distinguishing Stalinism from Leninism and Trotskyism.